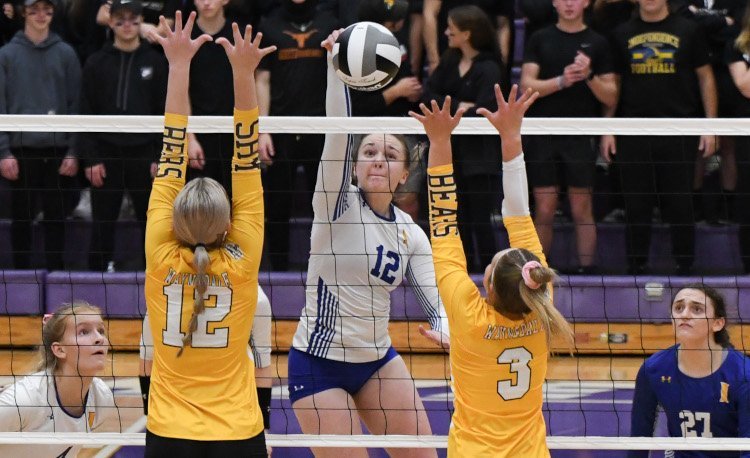 BARBERTON—With a 3-0 sweep of Applecreek Waynedale, Independence will play in a sixth straight regional championship game on Saturday.

“It’s always good to win here,” said Independence coach Tony Messina. “That team was good and they weren’t going away. They played great defense and they have a really young team, they’re going to be a really good team.”

Waynedale took it to the Blue Devils in the first set.

The Golden Bears jumped out to a 6-1 lead before Independence settled into its offense and rallied for the first set victory.

“They battled us and took us out of our system,” Messina said. “With how young we are, and I’m not putting it on that, but it was the first time coming here for many of them and we battled through it and got through it.”

Independence leaned on seniors Grace Taliaferro and Sammy Barther, who have played in their fair share of regional tournament matches, and sophomore Sofia Smotek, who got her first taste of regional competition last year as a freshman.

“The core is our two seniors who have been here and Sofia was here last year,” Messina said. “Sammy and Grace are seniors and they were huge. They held us together this year.”

Waynedale led by as many as seven points in the second set before the Blue Devils made their move.

With the Golden Bears holding a 16-9 lead, freshman Haley Wilson reeled off a string of seven straight service points and Independence went on to score seven of the final nine points to win the set.

Independence never trailed in the third set as the Blue Devils closed out the match with an exclamation point.

The Blue Devils, who improved to 18-8, have the chance to avenge a regular-season loss to Lake Catholic on Saturday.

The Cougars, who advanced to the regional final with a 3-0 win over Columbiana Crestview, swept the Blue Devils back on Oct. 1.

“We’re going to practice (on Friday) and we aren’t going to put a lot of pressure on ourselves,” Messina said. “Lake Catholic is awesome. I don’t know if we have enough weapons to compete with them. We just have to try to do our thing and see what happens.”