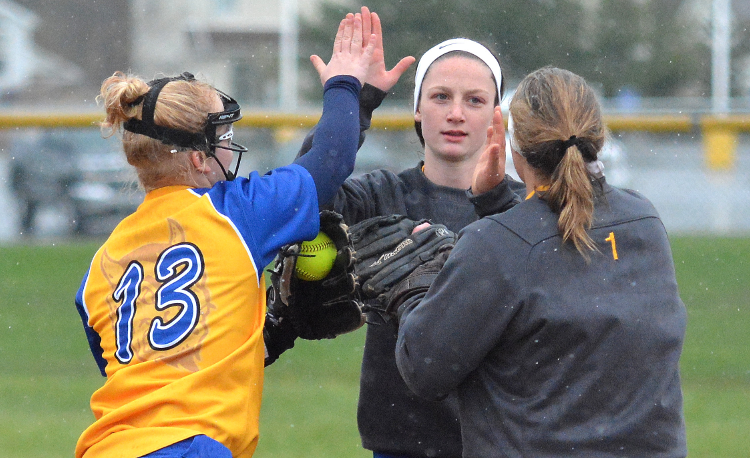 Independence scored three runs in the bottom of the seventh inning to top league rival Wickliffe on Tuesday, 4-3.

Elise Nelson hit a two-out single that scored Jordan Kohut to give the Blue Devils control of the Chagrin Valley Conference Valley Division.

“It was an amazing feeling,” Nelson said of her walk-off hit. “I was so proud of my team and how we never gave up during the game. It was a great team win and I feel it gave us the confidence that we have been needing within the last few weeks.”

With the win, the Blue Devils improved to 11-3 overall and 7-0 in league play. Wickliffe dropped to 10-4, 8-1 and will need a win over Independence on Monday to keep alive its chances for winning the division.

Independence hasn’t trailed often this season but the Blue Devils handled the situation well and came through with the clutch hits they needed in a big game.

“We’ve trailed a little bit throughout the year but it was nice to come up in the bottom of the seventh with my seniors, Jenna (Suhy), Olivia (Pallini) and Sarah (Piteo) coming up to bat,” Independence coach Garry Moore said. “At that point, you’re pretty confident in your ability to score those two runs.”

Wickliffe scored a run in the top of the third and added two more in the fifth to take a 3-0 lead.

Olivia Clark singled and scored on Caitlyn Henderson’s double in the third and Danielle Wood, Gina Ranallo and Hannah Levon each reached on errors in the fifth that led to two runs.

Independence began its comeback in the bottom of the fifth Cayla Mazzola singled and scored on a Piteo single.

Levon had held the Blue Devils to just one hit and three baserunners through the first four innings.

“That girl from Wickliffe really shut us down,” Moore said.

Suhy led off the Independence seventh with a single and she scored on Piteo’s one-out double. Ashleigh Porter then was hit by a pitch to put runners and first and second and Kohut delivered an RBI single to tie the game at 3-3.

“Jordan Kohut has been amazing all year offensively,” Moore said. “She came up with a big single and RBI. She’s been almost a phenom offensively this year. She’s just doing a great job.”

Morgan Pascarella then reached on a fielder’s choice that brought Nelson up to the plate with two down and runners at first and second.

She hit the third pitch she saw into the outfield to end the game.

“I’m really proud of Elise,” Moore said. “She has really come on this year. I think she batted one time last year, she was a flex player, and this year we gave her an opportunity to show what kind of offensive skills she has and she’s done really well.”

Porter picked up the win for Independence after allowing just one earned run on seven hits and she struck out 11.

“She had 11 strikeouts but here’s the most important thing about it, she’s a freshman and came up twice with bases loaded and another time with two people on and she struck out twice looking at it but she didn’t let that carry over into her pitching,” Moore said. “I told her she’s not going to be on 100-percent as a pitcher and hitter all year, so good for her being a 14-year old kid and stepping up. That’s nice when you see that from a young kid.”

Henderson led Wickliffe with two hits and two runs batted in. Piteo and Kohut both had two hits for Independence.