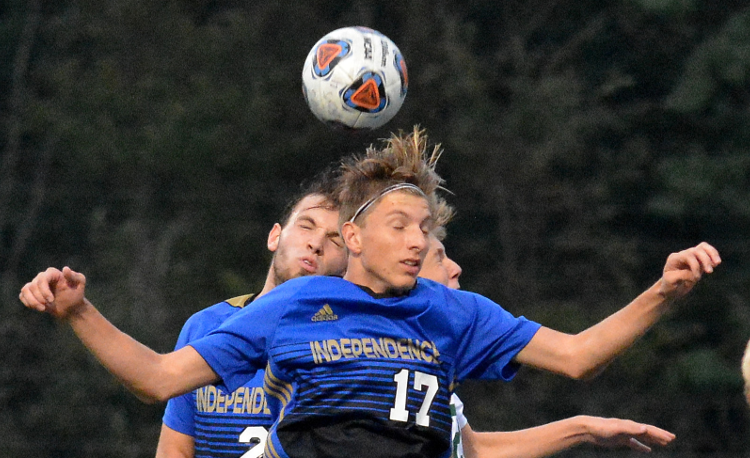 With the expansion of the Chagrin Valley Conference, Independence and Kirtland no longer compete against each other for league titles but the rivalry developed over the years remains strong.

On Thursday, the Blue Devils edged the visiting Hornets, 1-0, in a battle of two state-ranked teams who earned the No. 1 seed in their respective district tournaments.

“A little pride was on the line in this battle of No. 1 vs. No. 2 in Greater Cleveland,” Independence coach Ryan MacRaild said. “With Kirtland being ranked sixth in the state and us at 13, the boys wanted to make a statement.”

Brandon Patton scored the game’s only goal off an assist from Christian Streibel. Ethan Manelski recorded 12 saves, including one in the closing moments to preserve the victory.

The win extended Independence’s home win streak to 40 straight games. Their last loss on their home turf came on Aug. 19, 2016.

“We purposely played this game as a friendly tune-up for the playoffs and it was a good chance to go up against one of the better teams in Cleveland and get a challenge before playoffs start,” MacRaild said. “The boys had the home record on the line and wanting to finish the year on a high note; 68 career wins for the seniors is pretty impressive.”

Independence’s senior class improved to 68-5-3 in their four-year careers. The Blue Devils put that record on the line on Saturday when they close out the regular season against Youngstown Ursuline.

The Blue Devils have won three straight against the Hornets. The two teams battled to a 0-0 draw in 2016.

Kirtland dropped to 12-4 on the year.

“I’m proud of the fact that we live and die by our own ideas,” Kirtland coach John Valentic said. “We believe in building out of the back and not just booting it down the field. That philosophy comes with risks, it comes with mistakes. Tonight, a mistake cost us a goal and ultimately the game. I still would rather play our style than anyone else’s.”

The Hornets next play on Oct. 19 when they host the winner of the game between No. 8 Wellington and No. 9 Brooklyn in a sectional championship game.