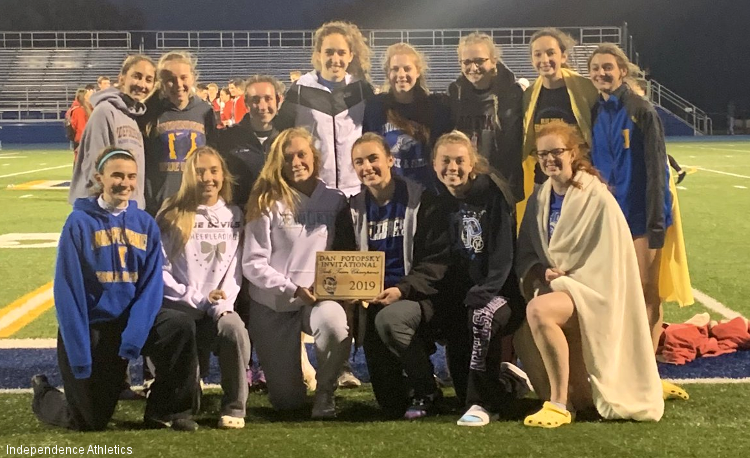 Led by Erica Esper and Madison Stepanik, Independence’s girls’ team took home the team title at the 2019 Dan Potopsky Invitational on its home track on Tuesday.

The Blue Devils scored 199 ½ points while second place Parma finished with 106 ½ and VASJ placed third with 106. Kirtland (93) and Cuyahoga Heights (86) rounded out the top five.

“It was super exciting,” said Esper, who won two events and placed second in another. “Our team had a number of great events, both track events and field events. Madison Stepanik also won the girls’ Field MVP, which is a huge accomplishment considering it’s only her first year of track. It’s good to know that all of our hard work is paying off.”

Stepanik won the shot put and the high jump.

“I was super excited about winning high jump and shot,” she said. “It was a first for me, so I was pretty happy with my placement and how I did in those events.”

She threw the shot 31-feet, 9 ½ inches to beat teammate Grace Smotek by 8 ½ inches. She cleared 4-feet, 10 inches to win the high jump by four inches over Cuyahoga Heights’ Acacia May, who finished second.

“I was more satisfied with my high jump than my throw,” Stepanik said. “I didn’t throw as far as I was wanting to in the meet. I had a good practice the day before but I didn’t elevate my throws in the meet and didn’t throw quite as far as I wanted to in the meet. As for high jump, I was pretty satisfied with my jump. I’ve been working on my form, which was terrible in the beginning of the year but thanks to the help of my coaches it’s gotten a lot better. I was happy that I cleared 4-10 but I wanted to see if I could clear 500 even though I’ve never attempted it before. I would say I’m very happy with what I jumped.”

Stepanik also finished eighth in the discus and sixth in the long jump.

“Going into the meet, I felt good about disc but I didn’t get a good warm up, so when it came to actually throwing in the event I didn’t do as well as expected,” she said. “As I said before, I need to work on elevation with my throws in both events and with disc, my form still isn’t what it can be. For long jump, my long jump form needs improvement too. I need to look up and use my arms more when I jump instead of looking down and kind of letting my arms go.”

Esper won the 1600-meter run with a time of 5:44 and also teamed up with Andrea Klima, Emily Skoczen and Paige Westerburg to win the 4×800-meter relay in 10:36. She finished second in the 3200 to teammate Makenna McGhee.

“Overall, I was satisfied with my meet, although I would’ve liked to shave some more time off of my 3200 and 800,” Esper said. “Makenna and I pushed each other in the 1600 and 3200; she had great races as well. I was also proud of our 4×800 team. Although it wasn’t our best time for the season, each member contributed and we worked together as one to get the win.”

Independence’s Mahlaina Leichliter claimed a win in the triple jump with her leap of 27-feet, 4 inches.

Austin Knaack led the Redskins with a pair of wins.

Darien Tillet also won an event for the Redskins when he finished first in the 1600 with a time of 4:49.

Independence’s Luke Clymer and Robert Artrip finished first and second in both the shot put and discus.

Fairport Harding’s Rashawn Alston won the long jump with a leap of 20-feet, 3 inches and Kirtland’s Luke Gogolin took home the triple jump title with a distance of 34-1. Gogolin also finished third in the high jump.

“I was pretty happy with my high jump performance,” Gogolin said. “I tied my (personal record) at 5-10. I also jumped 34-feet in the triple jump and I was pretty satisfied with that too. At first, I thought triple jump was going to be very hard and I thought I wouldn’t even make it to the pit, but once I got the hang of it, it was pretty fun and I enjoy the event a lot.”