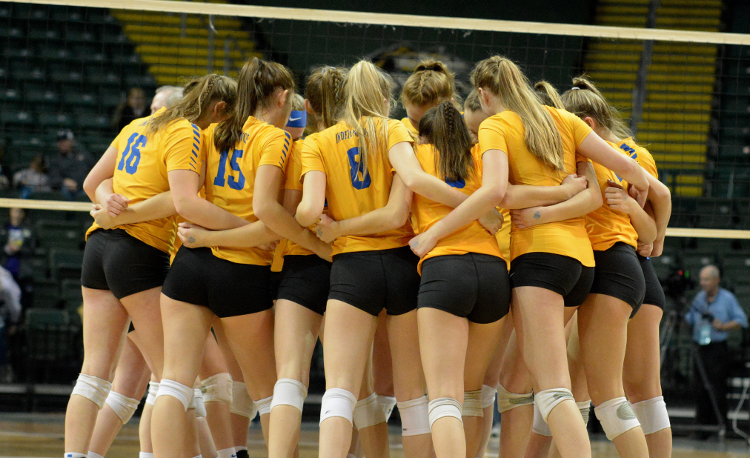 Wow! Sometimes that’s all you can say. Wow!

The Brooklyn Hurricanes came strolling into the Independence High School gym Thursday evening riding a six-match winning streak and sporting a gaudy 6-1 record, including a 3-0 mark in the Chagrin Valley Conference Metro Division. Less than an hour later, they limped off the floor after being trounced by their rude hosts, suffering through a sweep by the scores of 25-8, 25-7 and 25-2.

But that’s what happens when you face a team that has 10 players back from last year’s run to a second-place finish in the state Division III tournament. A team that has yet to lose a set in six matches. A team that is so focused on taking the season one step further than last year that it doesn’t even pay attention to its opponent.

“It doesn’t really matter who we’re playing,” said senior co-captain Maddy Bilinovic, who is committed to continuing her education and playing career next year at Penn State.

“We don’t really care who is on the other side of the net. We just care about the 15 players on our bench. Every point, we give 100-percent. That’s the only way we’re going to get better in the long run. That’s our mindset every game.”

Bilinovic touched on just how determined the Blue Devils are to improve.

“Regardless of who we’re playing, we just have to play our hardest and not focus on the other side of the net,” said senior co-captain Katie Taliaferro. “Not knowing what the other team is about, we have to hype each other up. We try to have the mindset that this could be the best game of our life. We try to do that every time we step on the court.”

It’s not clear whether this was their best performance of the season, but it’s difficult to imagine a team being more dominant. Of the 17 points scored by the Hurricanes, six came on kills by senior outside hitter/setter Jaden Walz, who will be playing at Bowling Green next year. Nine of the remaining points came on errors by the Blue Devils.

In other words, Brooklyn was unable to mount any sort of an attack.

Brooklyn coach Debbie Hall said she knew her team would have its hands full. Not only is Independence very good, but the Hurricanes are quite young and inexperienced, starting two freshmen and having only three seniors on the roster.

“We knew they were a powerhouse,” she said. “Today (my team) just wasn’t prepared. I think they were a little nervous and it showed.”

The first two sets started in similar fashion, with Independence never trailing and holding a 3-2 lead. In the first set, sophomore Macy McNamara helped the Blue Devils break away by serving five consecutive points—including two aces—to open a 12-4 lead. Soon it was 16-4 and 20-7, and the set was basically over.

It took a little longer for them to break open the second set, but with a variety of players putting the ball away, the Blue Devils opened leads of 7-2, 11-4 and 15-5. In an impressive display of depth, Independence had seven different players record at least one kill in the set. For the match, sophomore Hannah Wilson led the way with 13 kills, followed by Kalli Screptock with 10 and Grace Smotek with 7.

The third set was on a completely different level. With sophomore setter Abby Avila serving, Independence raced to a 15-0 lead before Walz had a successful block to end the streak and put the Hurricanes on the board. However, the Blue Devils soon had the ball back, and Smotek ran off seven consecutive points to make it 23-1. Sadie Habeeb then served an ace, and a point later Wilson had her final kill to end the match.

“It’s hard not to be discouraged after that kind of a loss,” Hall said. “I don’t think we’ve had a loss like that in a long, long time. But, knowing what we can do and seeing what we’d done before we got here, I still see great things for this team. They’re young and they’re growing, and I see some potential.”

Meanwhile, the Blue Devils are trying to stay in the moment and not get too far ahead of themselves.

It’s obvious the goal is to go one step further in the state tournament. But they know better than to think in those terms. Instead, they are thinking only about Saturday’s match with Zoarville Tuscarawas Valley, a team that has made the state Division III semifinals in each of the past two years.

“Win the next game. That’s our goal,” Screptock said. “Saturday is our next goal.”