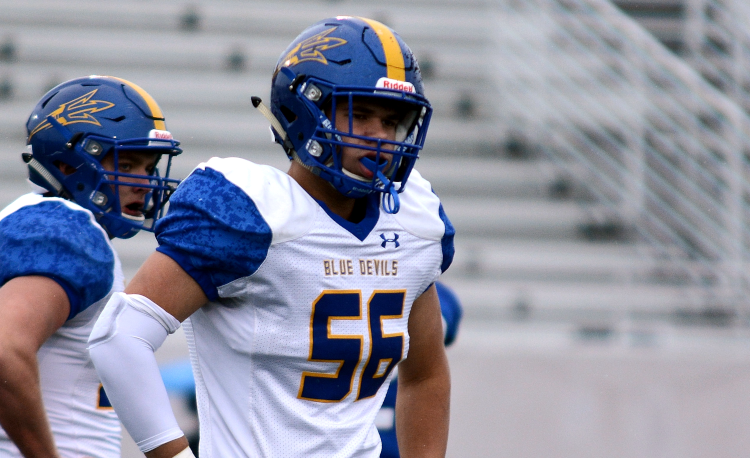 A thunderstorm delayed the start of Independence’s football season, but it was worth the wait.

The Blue Devils beat visiting Cuyahoga Heights, 35-0, in the first win against their rivals since 2013 and just the third dating back to 1999.

“That was big,” Independence coach Rick Adams said. “It felt really good. The kids were the most focused I’ve seen since I’ve been here.”

Adams had some concerns the Blue Devils might show up on Saturday night a bit sluggish after running through warmups and being prepared to play on Friday.

He was pleasantly surprised.

“They were ready to go Friday night and my concern was coming back, how would they react to coming back the next night,” he said. “They really wanted this one. They really put everything into it.”

“He changed direction and went back on a toss and went all the way for a touchdown,” Adams said. “That got us going. We didn’t have a lot of touches for Kyle but he made the most of what he had.”

Zygmunt added another long touchdown run early in the third quarter to make it 14-0 and then Matt Richards took over.

Richards picked off a pass and returned it 11 yards to the Cuyahoga Heights 7-yard line. Rory Corrigan closed that drive with a short touchdown run to make it 21-0.

Richards then caught a pair of touchdown passes from Michael Tommer to close out the scoring.

“Matt stepped up at outside linebacker and made some big plays for us there,” Adams said. “He stepped up in the third quarter and had a big interception for us. That really changed the complexion of everything because we scored to go up 14-0 and he had the pick deep in their territory and we scored again. That was kind of a 1-2 punch right there that put us up 21.”

Sean Kuczmarski also recovered a fumble in the win.

“I told them it was all three phases of the game,” Adams said. “All our special teams from punt return to punt to kickoff and kickoff return, defense just dominated all game. The defensive guys did a great job. On offense, we sputtered a little bit but we got it going.”

Now, the Blue Devils have to refocus to avoid a letdown game next week at Cardinal.

“That’s the challenge for the coaching staff,” Adams said. “We told them at the end of the game, it’s just one game. We’re 1-0, we’re not 10-0; it’s just 1-0 right now. Enjoy it tonight and tomorrow but on Monday, it’s time for Cardinal. We need to get back to work. That’s the challenge we have this week.”