Independence wins at Beachwood for first time since 2014 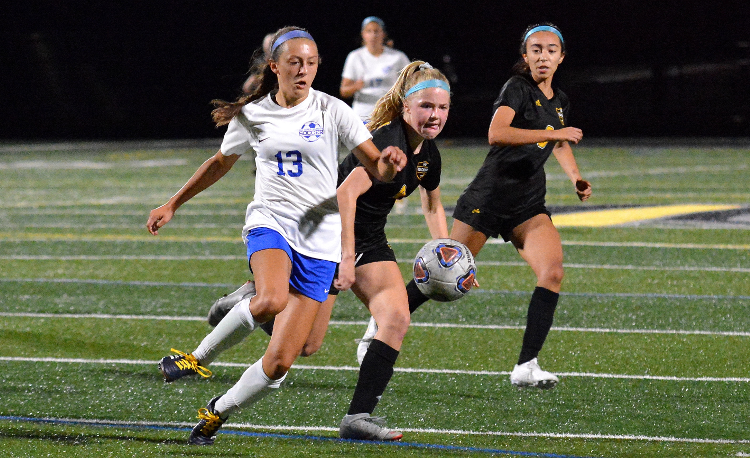 BEACHWOOD—Alex Adams scored three minutes into the game and Molly Dougherty added a second-half penalty kick to lead Independence to a 2-0 win at Beachwood in a key Chagrin Valley Conference Metro Division game on Thursday.

The win was the first for the Blue Devils at Beachwood since a 2-1 win during the 2014 season. Beachwood won both home matchups last year, 2-1 in the regular season and 1-0 in the playoffs, and the two league rivals tied 2-2 at Beachwood in 2016.

“Last year, same game, we got an early goal when Molly put one in eight minutes into the game but we just had some defensive lapses,” Independence coach Bryan Less said. “They had some good opportunities in the second half but our defense played really, really well.”

Dougherty set up the Adams goal with an accurate pass into the middle of the field and Adams did the rest.

“That was a great finish,” Less said. “We worked on that in practice, a little double pass up the side with the center mids to the forward and we talked about crossing to the weak side. Alex made that beautiful run and tapped it into the net. There’s nothing like a goal three minutes into a game. That’s a beautiful thing.”

Beachwood nearly tied the game when Carly Petti drilled a shot at Independence keeper Reni Kaiser, who deflected the ball but left Petti with an open net. Marisa Silvestro beat the ball to the goal to record the non-goalie save.

That wasn’t the only scoring opportunity for the Bison.

Romi Roth assaulted the net during stretches in the second half and Sydney Sarver had an apparent goal on a Roth deflection off the post erased by an offside call.

“We got a little lucky at times,” Less said. “We’ve been unlucky this year with hitting posts so I guess the luck got reversed for us tonight. Overall, the defensive effort was great. We fell back on our heels a little bit in the second half. Our passing fell off and you can tell their intensity picked up but overall I loved the effort of our team.”

Riccela DiGeronimo was tripped up inside the box and Dougherty converted the penalty kick with 5:57 remaining in the game.

With the win, Independence improved to 7-2-2 overall and 4-0-1 in the Chagrin Valley Conference Metro Division. The Blue Devils can clinch the league title with a win over Trinity on Oct. 3.

Beachwood dropped to 6-3-2, 3-1 but still has a chance to win the league title should Trinity upset Independence.

“It’s tough because we had complete control of our destiny in the conference,” Beachwood coach Jonathan Kostoff said. “We needed a win or a tie tonight and we didn’t get either. It was a tough start for us with them scoring a goal in the first three minutes. You want to set the tone for the game, especially at home with a good crowd behind us, and we didn’t have a good first 40. The first half was not our best. We had a lot of good moments in the second half, a lot of good chances, but at the end of the day it’s about putting the ball in the back of the net and we couldn’t get it done. Give them credit; they played a really good defensive game and Reni is terrific between the pipes for them.”

Beachwood closes out league play with a game at Wickliffe on Sept. 26 and a home game against Lutheran West on Oct. 2.

“We have to look ahead to the playoffs and finishing strong in these last five games,” Kostoff said. “There’s still a lot of work to be done but it’s a tough loss. Our main goal was to win the CVC but this one really set us back.”