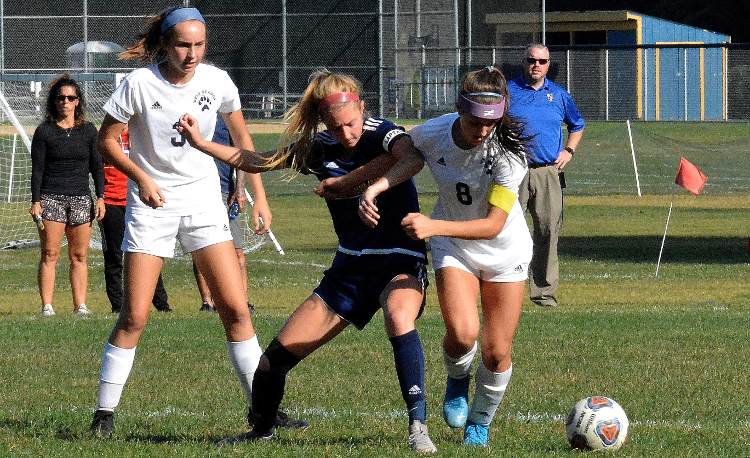 KIRTLAND—Thursday’s matchup between the Chagrin Valley Conference Chagrin Division’s top teams proved to be everything it was billed to be.

“One heck of a result against a great program and a great coach,” West Geauga coach Kori Jesenovec said. “I’m proud of the grit and determination the girls came out to play with in the second half. They have their goals for this season and I’m proud they are chasing after them.”

The Wolverines, ranked No. 11 in the latest Division II state poll and No. 2 in the News-Herald Top of the Crop, trailed 1-0 after Kirtland’s Aria Evans-Roskos headed in a cross from Maya Zovko.

Nicola Ehrbar tied the match with 1:59 left in the first half when her shot from distance took a fortuitous bounce over Kirtland keeper Corinne Aquila’s outstretched arms and spun backward into the net after hitting the ground.

The Hornets, ranked No. 2 in the Division III state poll and No. 1 in the Top of the Crop, regained the lead four minutes into the second half when Lidia Rodin’s shot from the left flank deflected off the hands of West Geauga keeper Ashlyn Drayer and to Zovko, whose powerful strike ended up in the left corner of the net.

With the win, West Geauga improved to 10-1 overall and 4-0 in league play. The Wolverines clinched at least a share of the CVC Chagrin Division title and needs a win over Hawken on Sept. 26 to win the title outright.

“Several years back we choose to play in the Chagrin Division for days like today,” Kirtland coach Ed Bradac said. “We will learn more from this loss than we would from a one-sided win. Today had the feel of tournament soccer and that will only make us better in the end.”

Corinne Aquila finished with 11 saves for the Hornets.