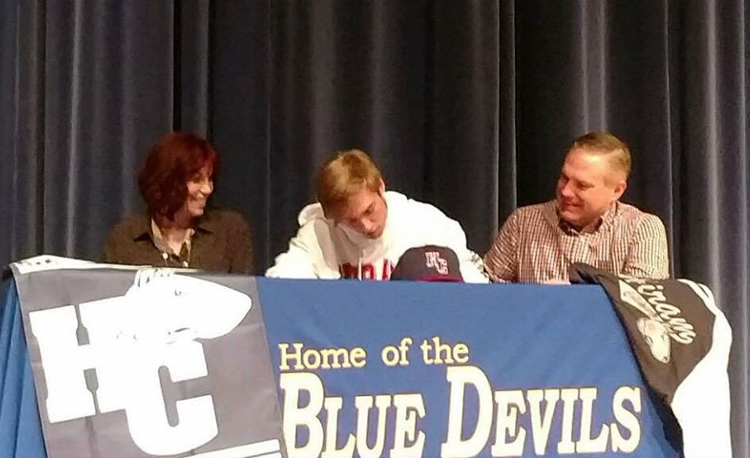 Independence senior first baseman Jordan Mallernee solidified his college plans on Friday morning when he signed a letter of intent to continue his education and baseball career at Hiram College.

Mallernee chose the Terriers over interest from Mount Union College.

“It’s a blessing to have this opportunity,” Mallernee said. “I’ve always dreamed of having this chance since I was a little kid. Now my dreams are coming true. When considering schools, I was really only between Hiram and Mount Union. After talking to family, friends, and coaches, I decided Hiram was the best place for me.”

Hiram began showing interest in Mallernee earlier this year. He took an overnight visit to the school and felt right at home.

“It was a lot like Independence,” he said. “On my overnight visit, I met some of the guys on the team and I liked them a lot and seemed to fit in.”

The Terriers recruited Mallernee as a first baseman and he’s confident he’ll excel at the position.

“That is where I am most comfortable,” he said. “I hope it’s a good fit, but I’m always open to play anywhere and to help the team be successful.”

Mallernee has developed a strong relationship with Hiram head coach Philip Brua and he’s looking forward to working with his future head coach.

“Coach Brua is awesome and I have briefly met the other coaches on my visits,” Mallernee said. “I’m excited to start working with them since he has shared the same interest in baseball that I have. I can’t wait to see what new things he will teach me along with what I have learned from all my other previous coaches.”

Mallernee, who plans to major in business or marketing at Hiram, is excited about his future as a Terrier but he’s not in a hurry to get there.

He has some unfinished business at Independence and this spring he’s hoping to lead the Blue Devils to a successful season.

“I am excited about this season,” he said. “It is kind of bittersweet at the same time since it’s the end of high school. This season should be good. We have some big plans this year. We have a strong team this year and can’t wait to see what happens. My goals are to clean up my game to get ready for college and go for the conference title.”