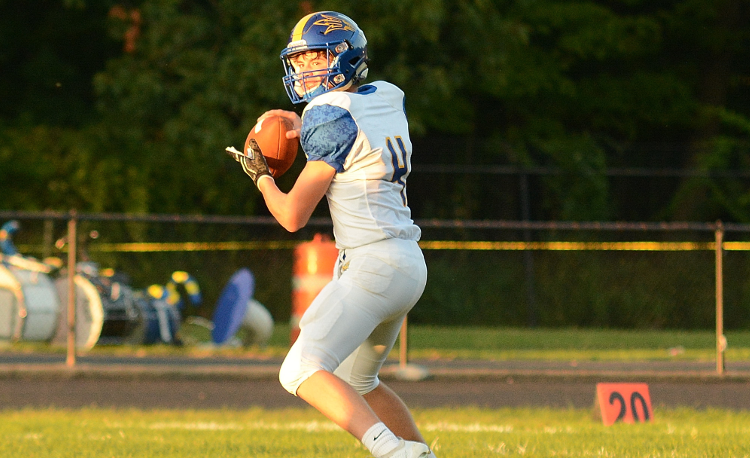 Sophomore Michael Tommer threw a career-high five touchdown passes to lead Independence to a 32-29 nonconference win at Columbia on Friday.

Behind Tommer, the Blue Devils shrugged off a slow start and steamrolled the Raiders late in the game.

“I think our first TD settled a lot of guys down and the defense found its way and started making big plays,” Independence coach Rick Adams said. “This was a team win.”

Columbia scored first on Cody Davis’ 7-yard touchdown run to give the Raiders and early 6-0 lead.

Tommer and the Blue Devils responded with an 83-yard scoring strike to Kyle Zygmunt to tie it. That duo would connect again later in the game.

The Raiders regained the lead with a second-quarter touchdown pass but again failed to convert the extra point.

Tommer, who completed 12-of-18 passes for 280 yards, sent the Blue Devils into the locker room with a 19-13 lead after completing touchdown passes to Jake Mitrisin and Nick Lasky. Mitrisin’s touchdown covered 14 yards while Lasky beat the defense on a 59-yard touchdown reception.

“He did a great job,” Adams said of Tommer. “We started out sluggish in the first quarter but he got his feet under him and managed us well. He kept his cool and poise and made some great throws. That throw to Lasky, Nick came out of the backfield and he hit him down the sideline. That was a big momentum play for us because it gave us a 19-13 lead right before half.”

Zygmunt opened the scoring in the third quarter with a 32-yard fumble return for a touchdown then he caught a 44-yard touchdown pass from Tommer to push the Independence lead to 33-13.

Tommer closed out the night with a 10-yard touchdown pass to Braden Sears.

“Zygmunt was very smooth running his routes,” Adams said. “He has that extra gear to break away from tackler. His first TD was a jailbreak screen. He beat his guy off to the sideline and then nobody can catch him.”

“The defense really stepped up and shut them down in the second half,” Adams said.