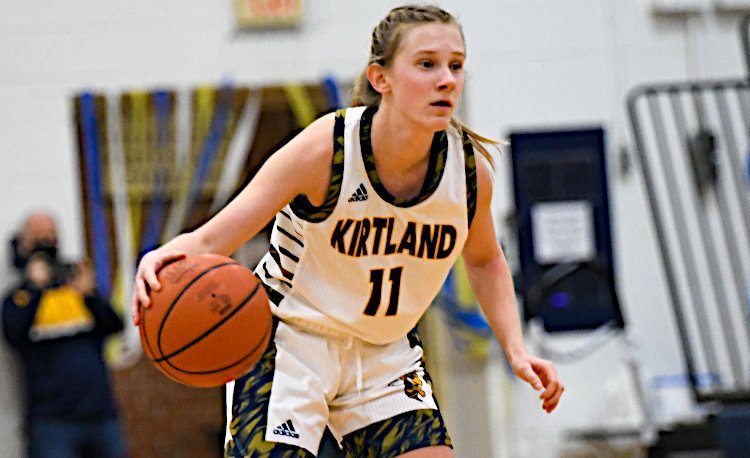 With the win, Kirtland improved to 14-4 overall and 11-2 in the Chagrin Valley Conference Valley Division.

“It means a lot because the Valley teams continue to make a name for themselves,” said Kirtland coach Brittany Zele. “We wanted the title outright and didn’t want to share it, so that was a big motivator for us.”

Kirtland last won the Valley Division title during the 2019-2020 season. The Hornets went 5-0 in league play last year but, due to COVID, no league title was awarded.

Rosson drained a school-record seven 3-pointers in the game.

“My teammates did a great job at feeding me the ball when they saw I was open,” Rosson said. “I was super excited, especially seeing how excited my coaches and teammates were for me as well. (The record) means a lot because it shows how well I was able to come to a new school and be able to contribute to the team’s success.”

Rosson went scoreless in the first quarter as the Hornets built a 15-7 lead.

Macy McIntosh scored six of her nine points in the opening quarter and Reilly Greenlee scored five of her 12 in the period.

Rosson found her groove in the second quarter as she hit a pair of threes and then followed that up with a 15-point third quarter. She drained six 3s in the second half to allow the Hornets to pull away from the Blue Devils.

“Everyone did some nice things today though which is always good to see,” Zele said. “We needed to play tough defense and want to score. We had a fun practice yesterday with shooting and I just wanted them to feel confident tonight and have fun.”

With the league title out of the way, the Hornets can now focus their attention on the upcoming postseason.

“The girls know we have other goals this year and the CVC was a stepping stone getting there,” Zele said. “We want to win out the rest of our schedule, which is not going to be easy with the teams we have lined up. This only prepares us for the postseason and they know that.”