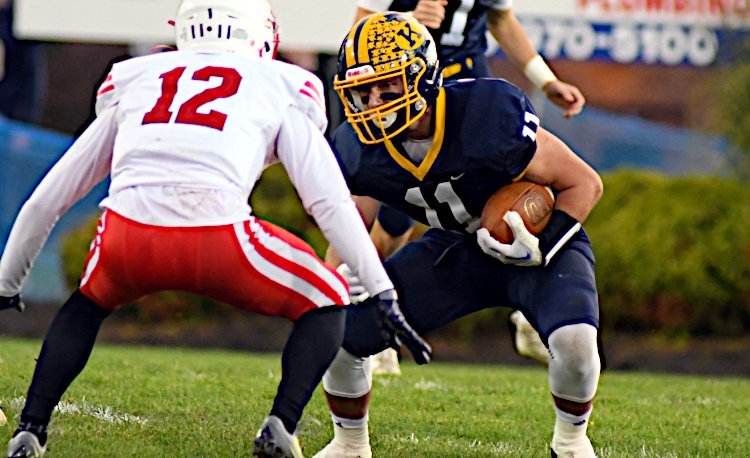 KIRTLAND—Perry scored the first and last touchdown of its Chagrin Valley Conference Chagrin Division showdown at Kirtland but the Hornets dominated everything in between and beat the Pirates 36-16.

“That’s a good football team over there,” said Kirtland coach Tiger LaVerde. “They’re going to win a bunch of games. I think they’re going to make a run in Region 17. They’re a bunch of tough kids. They’re quick and they get downhill on defense. I think we wore them down a little bit later.”

The Pirates opened the scoring with a 20-yard touchdown pass from Walter Moses to Owen McKoon. Perry added a two-point conversion for an early 8-0 lead.

After forcing the Hornets to punt, Perry drove to the Kirtland 28 but Rocco Alfieri forced a fumble and Philip LaVerde jumped on it to give the Hornets the ball at their own 3-yard line.

Jake LaVerde then threw a 69-yard touchdown pass to Gino Blasini and Tommy Gogolin ran in the two-point conversion to tie the game with 4:26 left in the first half.

“We were scrambling and then we hit a big pass to Gino to tie it up,” Coach LaVerde said. “It was big to be able to start wearing them down and control the clock to play keep away.”

The Hornets pounced on a loose ball on the ensuing kickoff and took possession at the Perry 28 but a penalty backed the Hornets up to the Perry 30 and Datone Washington, Jr., ended the Kirtland threat when he picked off a pass on 4th-and-26.

Perry went three-and-out and the Hornets quickly moved down the field thanks to another LaVerde-Blasini connection, this one for 43 yards that set up Alfieri’s six-yard touchdown run with 44 seconds left in the half. Nick Barisic’s extra point gave the Hornets a 15-8 lead at the break.

“(Jake) made some big-time throws,” Coach LaVerde said. “The fade out here to Gino before the half, and then Rocco ran it in. We had no time-outs left so we just took a shot. We were at the 50 with no time-outs, to get a score there was huge, and then to come out and score to start the second half was awesome.”

Kirtland dominated the second half starting with the opening possession of the third quarter.

The Hornet defense then held on 4th-and-9 from the Kirtland 45 and Gogolin scored on a 10-yard run to push the Kirtland lead to 29-8.

Gogolin then picked off a pass and Philip LaVerde broke a 43-yard scoring run to close out Kirtland’s 36-point scoring run.

Moses threw a 10-yard touchdown pass to Charles Rockwell with 5:51 left in the game.

Kirtland racked up 390 yards of offense while holding Perry to 238. The Hornets carried the ball 51 times for 254 yards and Jake LaVerde completed 5-of-11 passes for 136 yards with one touchdown and one interception. His favorite target was Blasini, who hauled in three passes for 129 yards and one touchdown.

Alfieri led the rushing attack with 23 carries for 117 yards and the score. Philip LaVerde added 56 yards on five carries, Gogolin ran for 45 yards on nine carries, and Jake LaVerde ran 10 times for 15 yards.

Moses completed 15-of-23 passes for 189 yards with two touchdowns to one interception. Brayden Richards led the Perry rushing attack with 47 yards on 10 carries. He also completed his lone passing attempt for seven yards. Jaden Hacking led the Pirates with five catches for 62 yards.

With the win, Kirtland improved to 7-0 overall and 4-0 in the CVC Chagrin Division and extended its regular-season winning streak to 52 straight games. The Hornets took over sole possession of first place in the division. Perry dropped to 5-2, 3-1.