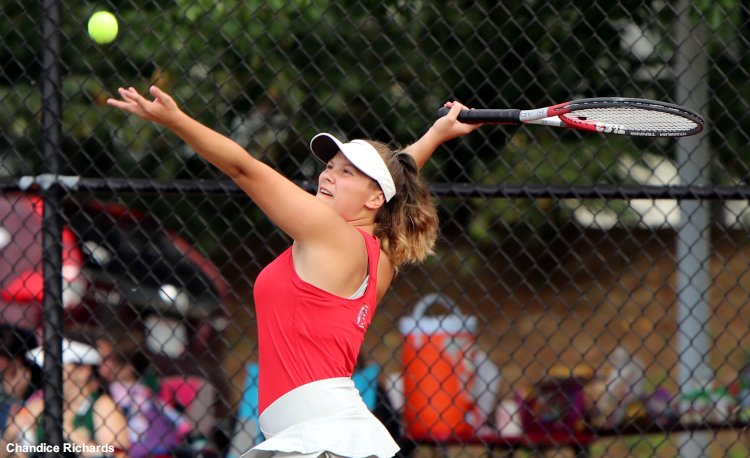 Several Chagrin Valley Conference tennis players advanced to the quarterfinals of the Division I and Division II sectional tennis tournaments on Monday.

Lakeside’s Aryanna Toth went 3-0 at the Solon Division I sectional with a first-round win over Cleveland Heights’ Persephone Noeem, 6-4, 6-2, and a 6-1, 6-0 win over Eastlake North’s Grace Forwick in the second round. She advanced to the quarterfinals with a 2-4, 6-4, (10-3) win over Aurora’s Ella Brubaker.

Toth will play Solon’s Phoebe Shi in the quarterfinals on Oct. 6.

Lakeside’s Keira Varckette won her first-round bout over Riverside’s Mia Morlan, 6-4, 6-4, and then bowed out of the tournament with a 6-0, 6-0 loss to NDCL’s Elena Fleming.

Cheliu opened with a 6-3, 6-1 win over Gilmour Academy’s Katherine Frawley before bowing out to Nyborg.

Orange’s Blake Rothchild, the No. 2 seed, cruised into the quarterfinals with a 6-1, 6-0 victory over Lake Catholic’s Blair Banker and a 6-0, 6-0 win over Hawken’s Tina Tewari. She’ll play St. John’s Colleen Anderson in the quarterfinals.

Beachwood’s Amy Zhou also reached the quarterfinals with a 4-6, 6-2, (10-3) win over Conneaut’s Madelie Maire in the first round and a 6-3, 6-1 victory over Hawken’s Vanessa Grajzi in the second round. She’ll play No. 3 seed Brooke McNeal of Kenston in the quarterfinals.

The top four doubles seeds will square off in the quarterfinals.

Eliana Yang and Haley Garber of Hawken, the No. 1 seed, topped Gilmour’s Lucia Martino and Cashalle Cummings in the first round, 6-1, 6-0, and Perry’s Kara Vis and Reagan Bowden in the second round, 6-0, 6-0. Yang and Garber will play Orange’s team of Daniela DeMatat-Hiciano and Lily Guiler in the quarterfinals.

DeMatat-Hiciano and Guiler, the No. 4 seed, opened the tournament with a 6-0, 6-0 win over St. John’s Kide Housel and Christina Bellios, and then advanced to the quarterfinals with a 6-3, 6-2 win over Kenston’s Kaitlyn Torres and Madi Davila.

Perry’s Lily Walker and Audrey Austin, the No. 2 seed, will play No. 3 Dani Forte and Bella Hsieh in the quarterfinals.

Walker and Austin reached the quarterfinals with 6-0, 6-0 wins over Lake Catholic’s Kendall Pikor and Sophia Trem, and Gilmour’s Elizabeth Frawley and Elise Rondini.

Forte and Hsieh went 2-0 with 6-0, 6-0 wins over Edgewood’s Kaylea Yeager and Macey Louks and Geneva’s Annalisa Ellsworth and Abby Griffiths.