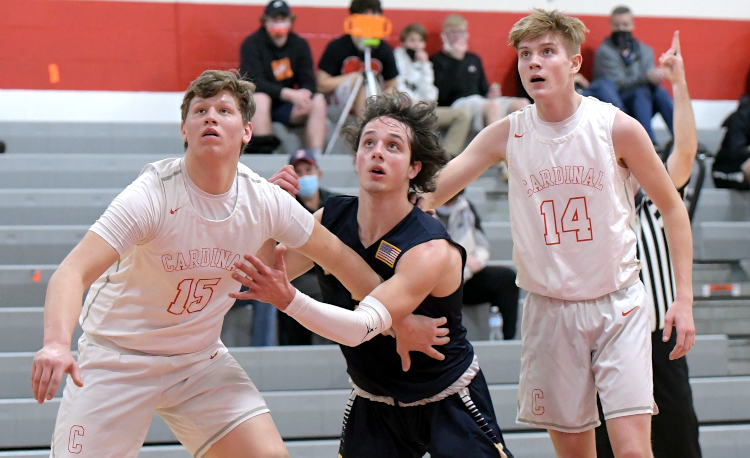 MIDDLEFIELD—COVID has disrupted high school sports across the country but Kirtland’s current situation might be unprecedented.

The Hornets pulled off a 68-61 win at Cardinal on Tuesday despite playing without their entire coaching staff.

Former head coach Matt Ridgeway, who last coached the Hornets in 2013, filled in as head coach and athletic director Matt Paul coached the JV squad to a win. Ridgeway had a busy day as he also coached both of Kirtland’s middle school teams to a win over the Huskies before guiding the varsity squad to its fourth win of the season and its third straight in league play.

Ridgeway didn’t think twice when he was asked to pull triple duty on Tuesday. Instead, he cherished the opportunity to coach again.

“I had an old coach named Don Delaney,” Ridgeway said. “He came to my camps years ago to speak. We had to wheel him in at that time. He came in and sat in front of my kids and he cried.”

“He said, ‘Boys, you don’t understand how I miss the smell of a gym,’” Ridgeway said. “I remembered that when I was driving out here and walking into the gym, it just revived me in his spirit to say, ‘It smells good in here and it feels good to compete.’ I don’t even care what the score is, I just want to enjoy the kids and be around them. As a head coach, that’s one of the things you go through and I don’t think you take enough time to reflect on those and to cherish those moments. I’ve coached enough basketball games that it doesn’t matter, three in a row, four in a row, it doesn’t matter.”

The Hornets have been without their coaching staff for several days now, which has disrupted their regular practice schedule and game preparations.

That showed up throughout the game against the Huskies as Kirtland’s game plan broke down at times and the Hornets made several uncharacteristic errors.

“The kids have been through a lot,” Ridgeway said. “The coaches haven’t been around–the whole staff all the way from seventh grade to varsity, there’s not a coach left–practice has been discombobulated time-wise and who is going to be there.”

After jumping out to an early double-digit lead, the Hornets stumbled in the second quarter and trailed the Huskies at halftime, 35-34.

Thanks to a Mason Sullivan and-one late in the third, Kirtland tied the game at 49-49 with less than two minutes remaining in the quarter.

Sullivan’s play sparked the Hornets to a 10-0 run and they played the Huskies even in the fourth to seal the victory.

“I was just going possession by possession,” Ridgeway said. “I wasn’t remembering what was happening in the last possession. I just wanted to win each one. We were keeping track of how many stops we had in a row and at some point, we had six in a row in the second quarter and we were losing. I just said put the ball in the basket because we were playing hard on defense.”

Joey Grazia set the tone for the Hornets as he scored a game-high 27 points and disrupted Cardinal’s offense throughout the game.

“It’s huge to provide for the team on both ends and get it started and have everyone rally behind me and give my teammates energy and confidence to start going to work and we did just that,” Grazia said. “All in all, it was a great team win.”

Grazia scored 17 of his 27 in the first half and closed out the game with five 3-pointers.

He was one of four Hornets to score in double figures as T.J. Green contributed to the win with 13 points, Anthony DeMarco added 12 and Sullivan finished with 10.

Not to be outdone, Cardinal also had four players score in double figures.

“I was pretty happy with it but you’re never really happy when you lose,” said Cardinal coach Jon Cummins. “I thought our younger guys came out and played hard and they hit some shots.”

Cardinal went toe-to-toe with the physical Hornets for most of the game but Kirtland’s pressure ultimately doomed the Huskies.

“We kept hanging in there,” Cummins said. “It’s nice when you’re making shots and we were able to do that in spurts tonight. We’ve just got to get better. It’s physical and those guys are physical and they put a lot of pressure on us and when you have a young group it’s about making decisions and a lot of our decisions weren’t the best tonight. You just hope they learn from it so the next game we’re not doing it over and over again.”

Kirtland improved to 4-4 overall and 3-0 in the Chagrin Valley Conference Valley Division while Cardinal dropped to 3-11, 1-3.