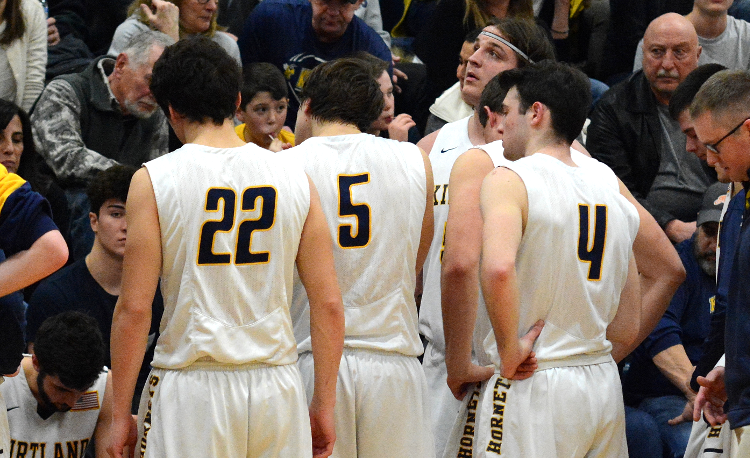 Seann McGill scored a team-high 13 points to lead Kirtland to a 62-55 non-conference win at Perry on Tuesday.

With the win, the Hornets improved to 13-5 overall and snapped a four-game losing skid.

“That win was huge,” McGill said. “After dropping four in a row, this win was really needed. We came together as a team and played a complete basketball game on both ends of the floor. We knew coming into the game that they were going to hit their shots, but it was about how we responded to that, which we really executed on offense to respond to the runs they made.”

With Nate Cubbison, Drew Schiano and Jake Reid all scoring in double figures, the Pirates made those runs.

Cubbison finished with a game-high 17 while Schiano and Reid contributed 15 and 10 points, respectively.

“It was a huge win for us tonight to win vs a well-coached, tough team,” Kirtland coach Shawn McGregor said. “We continue to grow as a team together, learning what we can do to make our team the better.”

Kirtland had 10 different players score in the game, the result of the Hornets patiently operating their offense.

“We had great ball movement and got balanced scoring up and down the lineup,” McGregor said. “Kids stepped up and made plays down the stretch that we hadn’t made in some of the previous losses.”

Zach Samsa and Dawson Cosgrove also scored in double figures for Kirtland with 12 and 11 points respectively, and Jack Bailey pitched in with eight points.

Kirtland travels to University School on Friday while Perry (14-5) visits Harvey on Thursday.

“It was a great team win,” McGregor said. “I’m so proud of how the kids stepped up, played hard and just competed.”