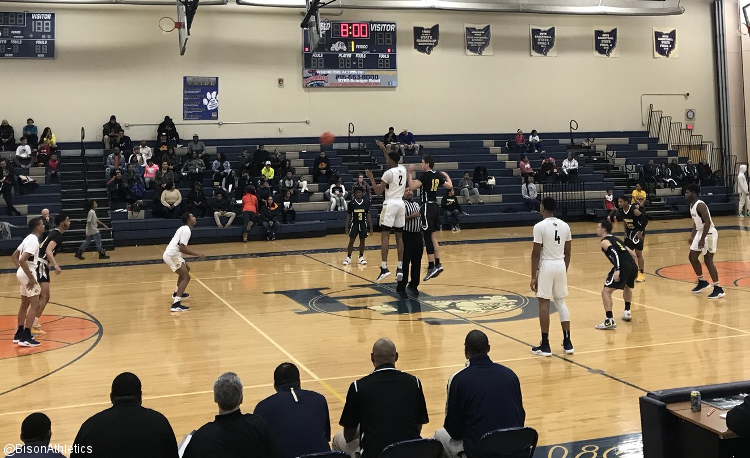 Jayson Woodrich scored a game-high 31 points to lead Beachwood to a 60-43 non-conference win at Division I Garfield Heights on Tuesday.

“It’s great for the kids to get this one,” Beachwood coach Matt Miller said. “We came really close against St. Ignatius on Saturday after leading the entire game and then couldn’t make shots in the fourth quarter, so it was nice for the players to have another chance in a big game again and luckily they were able to come through this time.”

Beachwood settled into a zone defense to slow down Garfield Heights’ top players and it worked for the most part.

The Bison struggled to control the ball in the third quarter and fell behind the Bulldogs but regained their composure and pulled away in the fourth.

“We did a pretty good job in our zone tonight, especially getting out to their two good guards,” Miller said. “Those two have a lot of Division I offers already so it was a definite priority to get out to them and make their shots as tough as we could. In the third quarter, we turned it over a little and lost our lead but in the fourth, they learned from their mistakes and not only broke their pressure but got some really good looks out of it. We told the guys they would get some good looks if we could keep our composure and find the open man and we were able to knock down shots and make our foul shots down the stretch.”

Woodrich stepped up to the challenge of playing against the Bulldogs and thrived in the spotlight.

“For Jayson, this is becoming the normal game for him,” Miller said. “Every team really focuses on trying to limit his touches and make his shot difficult. Like he has all season, he was able to make some huge shots for us and their pressure opened up some great looks for him. He really made some clutch shots all throughout the game. He was very steady all game long and continued to produce each quarter.”

Scott Newkirk also contributed with 11 points for the Beachwood. He scored all 11 in the fourth quarter.

“I’m really happy for Scott,” Miller said. “He works so hard and puts in extra time getting shots up. On Saturday versus Ignatius, he didn’t miss during the first three quarters but he couldn’t get anything to fall in the fourth quarter when the team as a whole went cold and we lost our eight-point lead. Tonight, Scott knocked down three huge 3s and both of his foul shots to really help fuel our offense during the stretch run of the fourth. He’s playing with a lot of confidence right now.”

“Overall, I’m just really proud of the players,” Miller said. “We’ve had some very close losses against some good teams this year so I’m really happy they were able to get this one. They deserve it.”