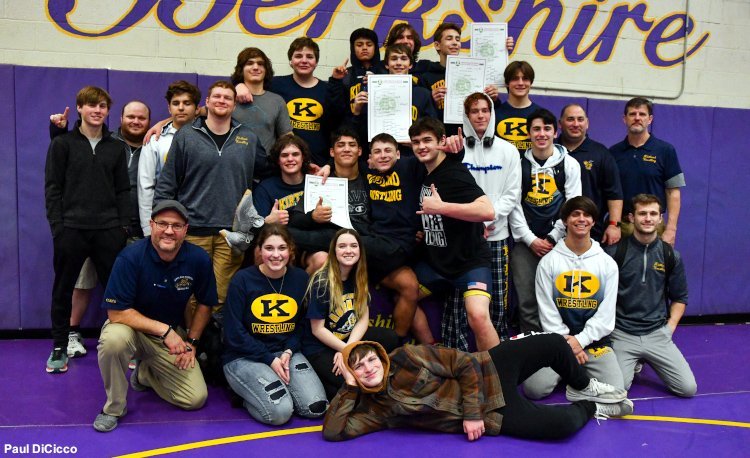 Five Kirtland wrestlers won individual championships and five others earned a spot on the podium as the Hornets won the Division III Berkshire Sectional championship on Saturday.

The sectional title was the first for the Hornets since 2015.

“Five champions, I was pleasantly surprised by that,” said Kirtland coach Scott Francis. “Our goal was to come in there and win it. We kept telling the guys, because they were watching the team score, so we kept telling them whether they were going for third or fifth, we need your team points. They got the job done so that was exciting to have everyone helping out.”

The Hornets finished with 179 team points. Ravenna Southeast was second with 162 ½ and Jefferson was third with 158.

Eddy Podojil-Schlesinger (113) and Brennon Braud (190) both placed fourth and earned a berth in next weekend’s district tournament.

Tyler Turk (138), Ian Borthwick (126), and Aidan Reed (215) all placed fifth for the Hornets and will serve as district alternates.

“Drew Duncan taking first at 120 was really good,” Francis said. “Gaetano Savelli won two really close matches to win at 144. Brennon was in that tough weight class at 190. He’s coming out in fourth place but there’s a good chance there is going to be a disappointed No. 1 (seed) from another sectional next week.”

Duncan entered the tournament as the No. 5 seed but went out and pinned both the No. 4 and No. 1 seeds on his way to the championship bout. He edged Manchester’s Evan Kusmits in the final, 9-7.

“He’s wrestling tough,” Francis said. “He’s getting in on kids’ legs and finishing. On top, he’s in constant motion and always looking for control.”

Cardinal will send five to the Garfield Heights district after Clayton Carman, Josh Ripley, Chase Simak, Andrew Tucholski, and John Avalon all placed among the top four at their respective weight classes.

Cardinal’s Mike Wojtasik will serve as a district alternate after placing fifth at 132.

Grand Valley’s Cheyenne Dockery was the runner-up at 126 pounds and will compete at the district tournament.