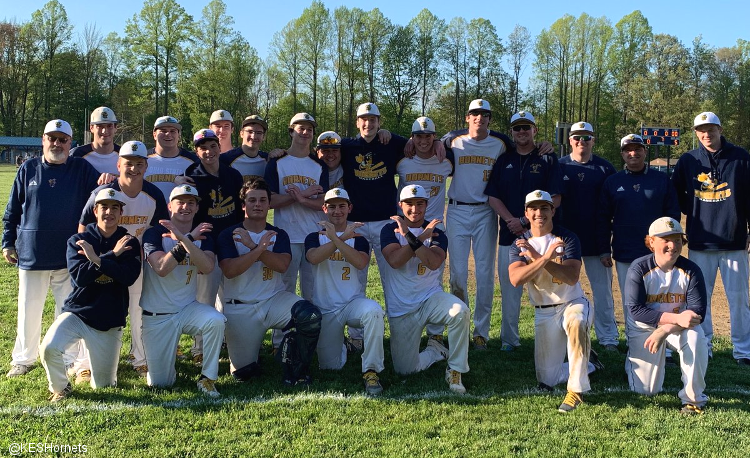 Kirtland scored five runs in the fifth inning and went on to defeat visiting Cuyahoga Heights in what turned out to be the Chagrin Valley Conference Valley Division title game on Tuesday, 5-0.

With the win, the Hornets improved to 16-5 overall and 13-1 in league play. Kirtland also claimed its first Valley Division championship since 2016.

“This was a great win against a great team,” Kirtland coach Luke Smrdel said. “There was a lot of build-up to this matchup and we played one of our best all-around games of the year, which is promising to see.”

Kirtland was forced to make a pitching change when starter Andrew Spencer suffered a hand injury in the fourth inning. He had allowed just two hits and struck out two before being replaced by Vinny Liuzzo, who went on to pick up the win.

Liuzzo allowed one hit and struck out five in 3 2/3 innings of work.

“Spencer took a line drive off a finger on his pitching hand, so we had to make a change mid-inning,” Smrdel said. “Vince did an unbelievable job coming into the game and getting the job done.”

With Kirtland’s pitchers quieting the Cuyahoga Heights bats, the Hornets took advantage of their opportunities in the bottom of the fifth.

Joey Torok reached on a fielder’s choice and moved to third on back-to-back singles by Joey Mongelluzzi and Seann McGill.

Mason Sullivan and Jayme Torok then hit back-to-back two RBI doubles to close out the scoring.

“We had a few opportunities before the fifth and we knew we had to make a move if we wanted to win this one,” Smrdel said. “Sullivan and Torok delivered.”

Liuzzo gave up a leadoff double in the top of the sixth but retired the final six Redskins he faced.

With the league title wrapped up, the Hornets have achieved the first of their goals. Now they’ll turn their attention to the postseason with the hopes of repeating as district champs.

“There was lots of excitement after this big win, but the guys were quick to point out, tomorrow is the biggest game of the year,” Smrdel said. “We reached our first goal, which was to win the conference. We have more goals left to reach.”