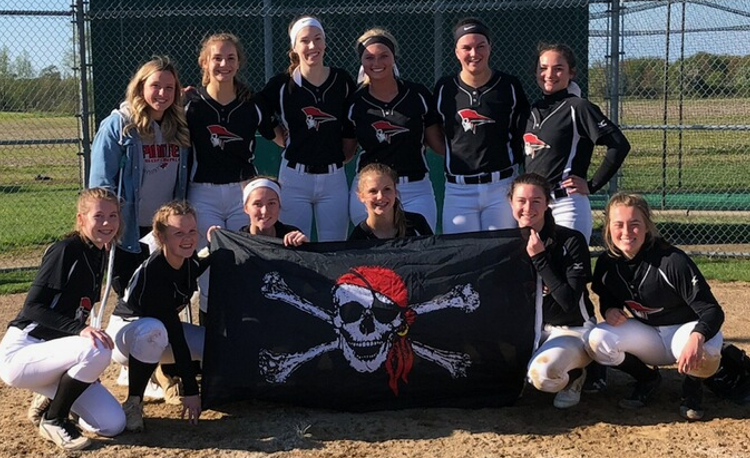 Olivia Moon struck out nine and Sydney Moon hit a two-run homer to lead Perry past Geneva in a Division II district semifinal on Tuesday, 3-2.

The win over the Eagles was the third of the season for the Pirates, who advanced to Thursday’s district championship game against top-seeded Jefferson.

“(Beating a team three times in a season) is very hard to do and in years past we have lost these games, but this team is different,” Perry coach Joe Medlen said. “They keep battling and do what we have prepared to do and we stick to the game plan and if we stumble and lose we know we have done our best.”

Geneva scored single runs in the top of the fifth and sixth innings to take a 2-0 lead over the Pirates.

Angela Vicini singled to set up Sydney Moon’s game-tying home run. She hit the second pitch she saw over the fence in center.

“I was looking to make good contact and get on base,” Moon said. “(I knew) right when I made contact with it and I had a big smile on my face. It was a great feeling and I’m glad that I could help my team win the game and continue keeping our dream alive.”

Olivia Moon then shut down the Eagles in the seventh.

“Olivia pitched an outstanding game,” Medlen said. “Her ERA is 1.75 and she held Geneva to two runs today and pitched a gem and will need that performance and being a senior she understands and embraces these moments.”

Elena Ciolli reached safely in the bottom of the seventh and scored on Faith Hartman’s walk-off RBI single.

The Pirates upset top-seeded Jefferson in last year’s district final, 9-7. They hope to repeat that feat on Thursday.

“We have the utmost respect for Jefferson and their program and know and understand they’re looking forward to playing after last season,” Medlen said. “We are confident in our abilities and know if we play our game and we limit mistakes we can be successful. We will stay loose and will try very hard to have a blast and enjoy every moment. These moments are very special and with our senior class, I really don’t need to say a lot, they have waited for this moment for a long time and we’re ready as we will ever be.”