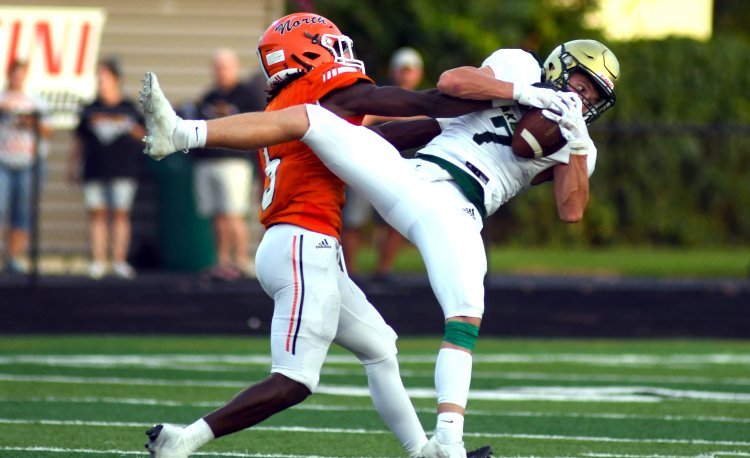 EASTLAKE—Alex DiSalvatore ran for two scores and threw for another as Lakeside improved to 3-0 with a 26-0 win over host North on Friday.

With the win, the Dragons have won their first three contests of the season for the first time since 2017 and the first time under head coach Buzz Edwards.

“It feels good, our kids deserve it,” Edwards said. “They work extremely hard. This senior group was eighth graders when I got here and they worked extremely hard. They have taken the lumps on their head. I’ve been telling them since January that wins are won in the weight room and they’ve earned it.”

DiSalvatore opened the scoring with a 12-yard touchdown run midway through the first quarter. North blocked the extra point.

The Dragons made it 12-0 when DiSalvatore threw a 10-yard touchdown pass to Jimmy Timonere with 6:48 remaining in the half.

Malachi Matlock added a 12-yard touchdown run in the third quarter and DiSalvatore closed out the scoring with a five-yarder in the fourth.

Lakeside used multiple players to amass 355 yards of offense in the game.

J’Shon Sanders carried 30 times for 175 yards while Matlock finished the game with 75 and DiSalvatore, who threw for 38 yards, added 47 on the ground.

“We’ve got a bunch of guys on offense and the great thing about being young and getting your head bashed in for three years is they eventually get older,” Edwards said. “We feel good about all of our guys, our quarterback, Matlock is a special player, (Mike) Olson makes plays. If you key on J’Shon, you’re leaving a lot of things open for us to do.”

The Dragons were even more impressive on defense where they limited North to just over 160 yards of offense and Angelo Collazo picked off a pair of passes.

“I think we’ve given up 14 or 17 points in three games, that’s pretty good,” Edwards said. “One thing I identified when we took over is defensively we had to get much better to take the next step as a program. The key additions on staff with Coach O’Keefe and Coach Pinto, and also dedicating almost the entire offseason to skills that help us get better defensively. Defense wins championships. We’ve been good on offense here, I think we can be better at times, but we haven’t been good on defense. If we’re good on defense, I think we can be great if we can develop some depth and continue to attack people.”