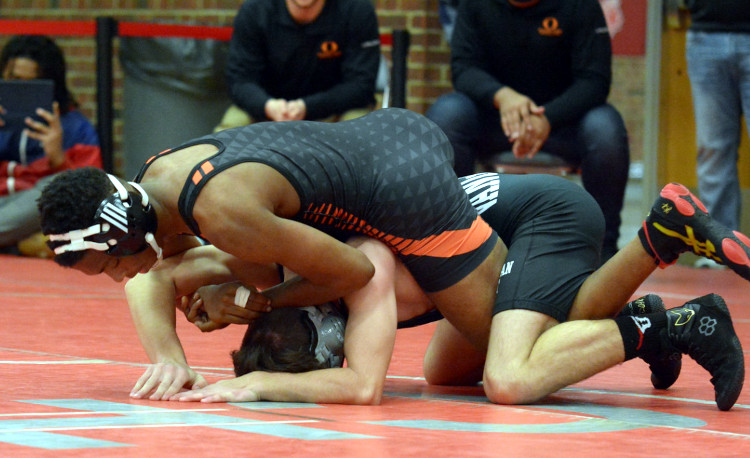 With two returning district qualifiers and several other wrestlers returning with varsity experience, the Orange Lions are optimistic about the 2020-21 season.

Second-year head coach Adam Kriwinsky is eager to see what the Lions can achieve this winter.

“I feel like this team has a lot of potential to do great things this season,” Kriwinsky said. “We have student-athletes that are willing to commit to continue getting better and I’m excited to be a part of it. I think every coach feels that they are a little behind given the circumstances, but facing adversity is part of wrestling and we know what we have to do to overcome it.”

Orange was among the schools that paused its winter sports activities due to the spread of the Coronavirus. That leaves the Lions a bit behind in their development during the preseason but Kriwinsky is confident his wrestlers will bounce back and make the most of their opportunities on the mat.

Kriwinsky will lean on returning district qualifiers T’Andre Allen and Grant Bell to provide the leadership and positive example for the other Lions to follow.

Allen, a 126-pound junior, finished 18-4 last season with eight pins, despite wrestling up at 132. He won the sectional tournament and finished fifth at districts.

“T’Andre Allen is really looking to make a name for himself this year,” Kriwinsky said. “After being so close up a weight class to qualifying for state, he is looking to be on top of the podium in Columbus this year.”

“Grant is a returning district qualifier who knows what it takes to be great at it,” Kriwinsky said. “He is working towards his goals each day and we are expecting him to continue to show his leadership.”

He’s projected to start at 138 pounds after finishing 2-0 with a pin last season. He finished fifth at the 2019 sectional tournament.

“Nick is an experienced wrestler who we are excited to compete after an injury cost him a lot of last year,” Kriwinsky said.

The rest of Orange’s lineup is young or inexperienced.

Freshman James Jordan is slotted to wrestle 120 while sophomore Willie Jones is at 132 pounds.

“James is excited to be starting out his high school career. He’s a respectful young man who is ready to go,” Kriwinsky said. “Willie has a lot of experience wrestling tough opponents and should fit in nicely here.”

Freshmen Alex Khouli and Zaid Al-Rahem will wrestle at 145 and 152 pounds, respectively.

“Alex will be a great asset to the team with his work ethic and experience,” Kriwinsky said. “Zaid is super committed to this sport and I’m looking forward to seeing him compete this season.”

Sophomore Arthur Bartko and junior Josh Decipeda both will compete at 170 pounds.

“Arthur had a lot of success last year. He is an athlete with a great feel for the sport. Bartko could make some noise this year,” Kriwinsky said. “Josh is a young man that understands commitment and we are looking forward to a great season from him. He has a consistent work ethic and gives his best effort each day.”

Freshman Avi Zarbavel and sophomore Fred Berland will grapple for the starting role at 195.

“Avi has had success in (middle) school and he is looking forward to the challenge high school competition brings,” Kriwinsky said. “Fred just loves the sport of wrestling and keeps getting better each day.”

Sophomore Christian Battle and freshman Ben White round out the projected starting lineup. Battle will wrestle 220 while White will compete at 285.

“Christian showed us that he has a lot of potential last year and we are hoping to see it this season,” Kriwinsky said. “”Ben is excited to be on the team this year.”

The young Lions have a strong core of talented wrestlers to lead the way for the younger wrestlers.

Kriwinsky hopes that balance leads to more dual meet wins and a better performance in the postseason.

“We have a good number of returning wrestlers and are pretty spread out amongst the weight classes,” he said. “This gives us a great opportunity to win dual meet matches. We have two returning district qualifiers, who are juniors this year, and we are looking forward to seeing them achieve their lofty goals.”