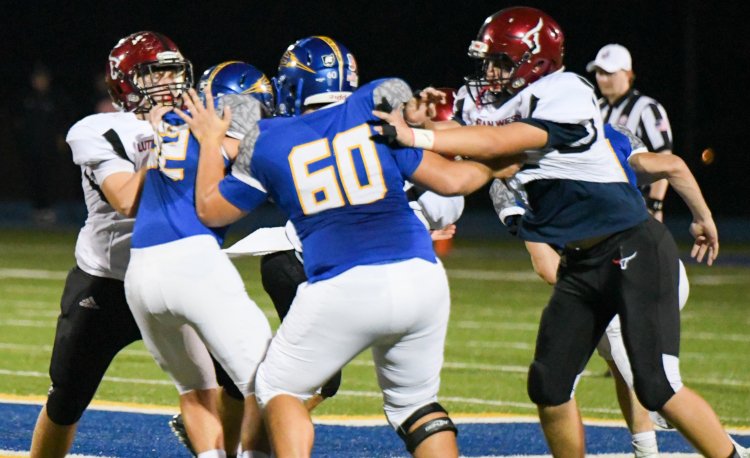 INDEPENDENCE—Lutheran West dominated the second half on the way to clinching the Chagrin Valley Conference Metro Division title with a 37-14 win over host Independence on Friday at Alumni Field.

The Longhorns trailed at halftime, 7-6, but used key plays on defense and special teams, and an always effective running game, to pull away from the Blue Devils to claim their first league title since 2005 when they won the PAC-10 Stripes Division.

“First of all, we’re just very thankful for our Lord and savior to give us the opportunity,” said Lutheran West coach John Parrella. “The kids really worked extremely hard all offseason and we’re just really excited our kids played really well and are getting better every week.”

Lutheran West set the tone early as the Longhorns opened the game with a drive that ended in Independence territory but chewed up nearly nine minutes of game clock.

The Longhorns turned the ball over on downs, but Parrella was pleased with how his team established the running game early on.

“We were driving and we thought we were going to be able to punch it in but we had some self-inflicted wounds on our way in with penalties and a fumbled snap, those types of deals that really hurt us,” Parrella said. “The good thing is we realized we could run the ball effectively and it paid off late in the game.”

After trading punts, Independence took over possession at the Lutheran West 45 and Kyle Zygmunt scored on a 10-yard run on the first play of the second quarter. Casey McGhee’s extra point left the Blue Devils on top, 7-0.

Lutheran West went right back to work with its methodical rushing attack.

Lutheran West dominated the second half and scored on five of its six second-half possessions. The only time the Longhorns didn’t put points on the board was on their final drive that ended in the victory formation.

“They had a great second half,” said Independence coach Rick Adams. “I think we’ve always done a good job and the kids have responded and been a good second-half team. Lutheran West was a better second-half team today. Watching them against Cuyahoga Heights last week, they came out and had a strong second half against Cuyahoga Heights too. Hats off to them, they really stuck it to us.”

Independence punted on the opening drive of the second half and the Longhorns took a 9-7 lead on Bryce Groppe’s 35-yard field goal.

The Blue Devils looked to get its big-play offense going but what looked like a big play on third-and-three resulted in an Emanuel Diaz interception when he stepped in front of Zygmunt at the last second to secure the pick of Michael Tommer.

“My thinking was it was third-and-three and they were going to crowd the box,” Adams said. “In the first half, we were getting past their corners so I thought we could sneak one past them. The safety made a great play. We got five yards on first down and three yards on second down. I should have just ran it again but I took the chance on that. I’ve got to give Michael a good opportunity and the kid made a great play.”

JaMarrion Banks converted that turnover into a 26-yard touchdown run that increased Lutheran West’s lead to 16-7.

The Blue Devils finally hit the big play when Tommer connected on two long passes, the second a 40-yard touchdown throw to Zygmunt, to pull the Blue Devils to within 16-14.

It was all Lutheran West after that.

Lewis closed out the scoring with an 11-yard touchdown run.

“Everyone is excited as coaches to have your defense playing well and to have your special teams truly being special for you and setting up a score,” Parrella said. “We just have to continue to play mistake-free football as we progress forward.”

Lewis finished the game with 33 carries for 229 yards.

“We have two really special running backs,” Parrella said. “They’re both very unselfish players. One will go out and block for the other without questioning it. It’s been great to feature not just one, but to have two of them there leading the offense.”

Tommer completed just 4-of-14 passes for 87 yards with one touchdown and one interception. He also led the Blue Devils with 27 rushing yards on 12 carries.

“I told the kids, every time when we lose a game the first thing I look at is me,” Adams said. “I’ve got to do a better job as a coach to put the kids in a position to win. I didn’t do that in the second half.”

It wasn’t for a lack of trying.

“We just missed Kyle on two throws, and defensively, we tried some different things to slow them down,” Adams said. “It was a tough second half. Things didn’t go the way we wanted. From the opening play call, everything seemed like it was one thing. We missed one bock on a play in the second half that if we get one block, Kyle has a pretty good play. Our second play of the game, we ran a screen, and Rory (Corrigan) was wide open. It was just one of those days, we were just inches off. The first play of the game, we were an inch away and Kyle and the defensive back got tripped up. We just missed the screen on the second play. It’s just one of those games. We were just inches from having a great play made.”

Lutheran West improved to 8-1 overall and 5-0 in league play. The Longhorns host Harvey in Week 10. Independence dropped to 7-2, 3-1. The Blue Devils host Brooklyn on Friday.