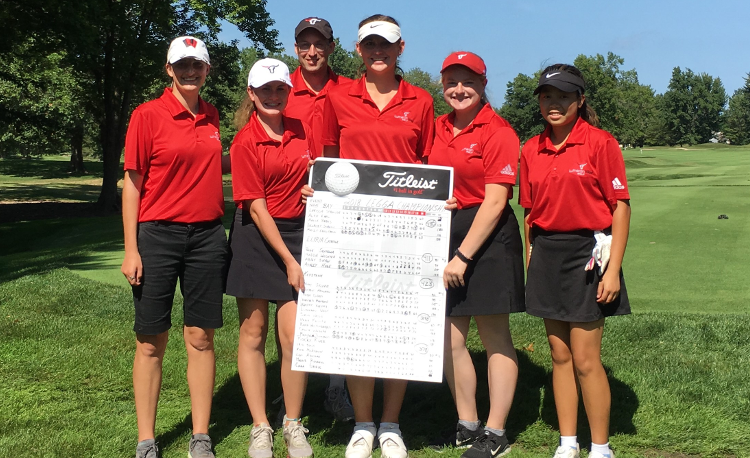 Lutheran West will compete in the Chagrin Valley Conference for the first time this fall and the Longhorns hope to make a good first impression.

“I am very excited for the 2019 season,” Longhorns coach Dave Ressler said. “We return our top three starters from 2018 and have two incoming freshmen. The girls have worked hard over the off-season taking lessons and playing many rounds in the summer. We are very happy to be in the CVC this year.”

The Longhorns finished 7-10 in dual matches last fall and placed second in the Lake Erie Girls Golf Association and also finished second at the sectional tournament.

Junior Sam Webb returns as the most successful of the Longhorns.

She finished fourth at the sectional tournament, second at districts and 18th at the state tournament.

Webb averaged 39.7 strokes per nine holes with a season-best of 32 and shot an average of 67 in 18-hole rounds.

“Sam is the complete package as a golfer,” Ressler said. “Sam is delightful to be around and has a tremendous work ethic and high goals for herself. She has a lot of power off the tee and is almost automatic from 15 feet in with her putting. She is the leader of the team and is always there to help the younger and less experienced golfers.”

Sophomore Callie Wabeke and junior Nadia Kauntz also return to the lineup with experience and success.

Wabeke averaged 56.4 strokes per nine-hole round with a season-best of 51.

“Callie was new to golf last season and had a very good first year,” Ressler said. “Callie is very attentive and always looking to improve her game. She has spent a lot of time practicing this summer and we look to her to lower her average 8-10 strokes this season.”

Kauntz shot a best nine-hole round of 54 last season.

“Nadia is starting her third year of golfing and has improved tremendously each season,” Ressler said. “Nadia’s strength is her ability to keep the ball in the fairway off the tee. She has participated in numerous clinics this summer and has been practicing a lot on the course. Nadia is a great student-athlete and is a pleasure to have on our team.”

With continued improvement from Webb, Wabeke and Kauntz and contributions from several newcomers, the Longhorns could be in a position to make a statement in their new league this fall.

“We expect to be in the hunt for the CVC title and our goal as a team is to reach districts and Sam returning to the state tournament,” Ressler said. “To reach these goals we are looking for continued improvement each week throughout the season and peak at sectionals. We will strive to have fun and play relaxed.”

Lutheran West opens the season at the CVC Preseason Tournament on Aug. 5.