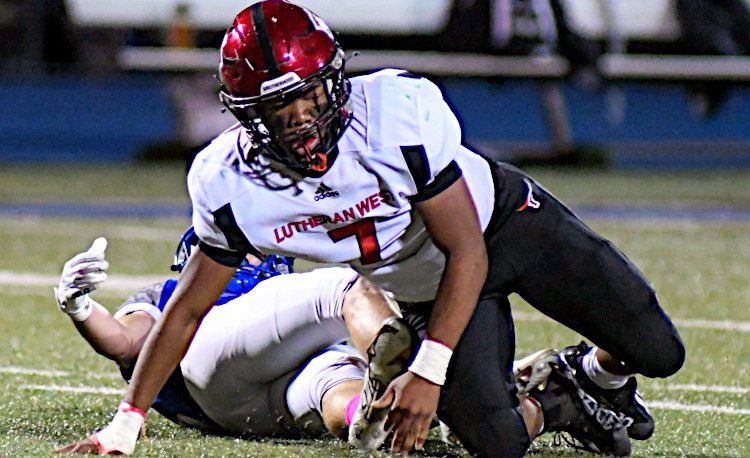 Lutheran West senior Eddie Lewis was one of the premier running backs in the Chagrin Valley Conference and next fall, he’ll be running wild at Lake Erie College.

Lewis on Wednesday signed a National Letter of Intent to continue his education and playing career with the Storm.

“It’s honestly a blessing for me,” Lewis said. “I’m super fired up for what my future holds, not only as an athlete but as a student and young man as well.”

In Lake Erie, Lewis found a school that met all of his needs on the field and off of it.

“My biggest factor for my recruiting was loyalty and trust,” he said. “Lake Erie was a place that I was interested in because they kept up with me on a day-to-day basis and a personal level. I wanted to go somewhere I was wanted and not just another number on the roster. I wanted to be an impactful player and turn the program around. I feel like Lake Erie brought in the right guys to do that.”

New Lake Erie coach Demir Boldin, who coached the team’s wide receivers and special teams last fall, made quite an impact on Lewis.

“He’s a family man and a great guy,” Lewis said. “He wants what’s best for us as men and he wants to win. I knew this coaching staff had the most potential because they’re all coming together for their first season and I know they’re hungry to turn this program around and win big. The same goes for this 2022 recruiting class; us players know that our recruiting class will be very important to the program in the next four years and all of these guys are ready to burn the boats from the past and set abroad a new ship of greatness.”

He is expected to play running back in college.

“I think I will fit great into the role,” he said. “The (offensive coordinator) was the coach that recruited me so I had plenty of hands-on talks with him and I know how he feels about me as a player and as a person. I’m a great back with speed and toughness and I feel like I can step up on the field and be an explosive back in the spread offense.”

Lewis is excited about his opportunity at the next level and he hopes his success in chasing down his dream inspires his younger teammates.

With the right attitude and effort, Lewis is confident they can follow his path to college football.

“Focus on school, live in the weight room, become a great leader in the process of becoming a great player,” he said. “Don’t focus just on sports. Football is the easiest part as an athlete. School and the consistency of being a great man will be the hard things to do. As young men, we need to let the distractions around us go and focus on what’s important now. Once your priorities are straight, then you will be able to be successful. I learned as a high school athlete to accept responsibility, be a courageous leader, be humble in everything you do, and thank whoever got you there in the process.”