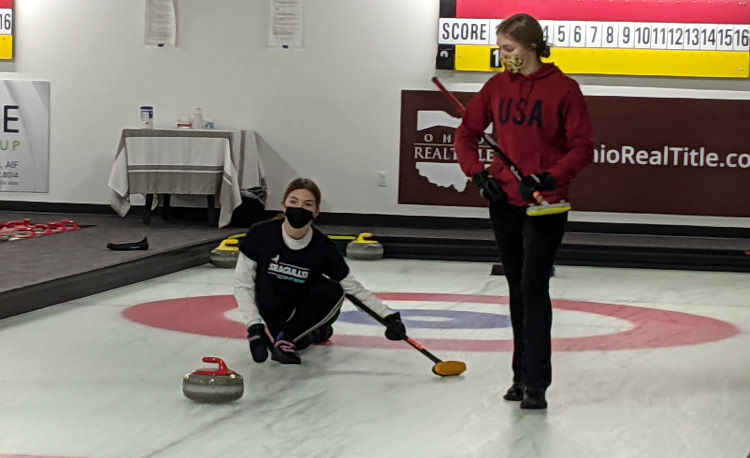 While most Americans were introduced to the ‘Roarin’ Game’ of curling through the TV coverage during the 2018 Winter Olympics, Independence sisters Hannah and Mallory MacRaild have a much longer history with the sport.

Introduced to the game born in Scotland in the 16th century by their maternal grandfather, Robert Dalrymple, the MacRaild sisters began curling in the early 2000s and still join their parents, Ryan and Heather, in family competitions around the area.

Hannah MacRaild, a junior at Independence High School, is a standout soccer player and swimmer for the Blue Devils. She quickly developed a passion for the sport and has been competing at a high level for several years.

She is part of a team hosted by the Mayfield Curling Club and has competed at the 18U nationals in the Great Lakes region for the past several years. Her team placed fourth in the country in 2019. A former teammate, Delaney Strouse, is now a member of the Olympic Development Program, High Performance.

Along with her passion for soccer and swimming, Hannah MacRaild now considers curling as one of her favorite pastimes.

“My grandfather led me to curling and curling is ranked pretty high on the list because of its uniqueness and the thought that goes behind the strategy, sweep calls and shot,” she said.

While most Americans can break down game film of a football game from any level or tell you the difference between the American and National Leagues in pro baseball, very few can explain the goal of curling.

Two four-player teams take turns sliding a 40-pound rock down a pebbled-ice surface aiming to position the most stones nearest the red bulls-eye painted on the ice.

Player one, also known as the Lead, delivers the first two stones as the second and third players sweep the path in front of the curling stone as it glides down the ice. While the shouting from the fourth player, or skip, may seem chaotic, the strategy used to guide the stone can be compared to the tactics used by master chess players.

Not only is each shot analyzed and strategized, but players have to adapt to the ever-changing ice conditions.

That strategy, coupled with the skill and communication of each team member, is essential to a team’s success. The weight, or speed of the rock, the amount it curls or bends as it travels, and the sweep, which lengthens or straightens a shot, all contribute to the outcome.

Reading the ice, the same way a golfer analyzes a putt, is crucial to scoring.

Hannah MacRaild serves as her team’s skip. She makes the calls for her squad but never sweeps.

The MacRailds will team up for the national event with Isabel Sah, a Brecksville-Broadview Heights student, and Emma Parker, who attends Kenston High School.

Parker is the team’s lead. Mallory MacRaild is the second and Sah serves as the third.

Parker and her twin brother Chase are members of the Cleveland Junior’s Program. Like the MacRailds, they too have a family tie to curling as their father, Carl, was an avid curler in the past and introduced his children to the sport.

But, like her sister, Mallory is especially committed to curling.

“The strategy and skill it takes to win are unique,” she said. “The pros make it look easy, but sliding that rock down the ice with accuracy is very challenging.”

While the Mayfield Curling Club opened its doors in 1962, the sport is relatively unknown in the United States, and especially outside of the Midwest.

Mallory MacRaild hopes to change that.

To grow the sport begins with exposure and the MacRailds and Parkers hope their success inspires their friends and other area juniors to participate.

Curling is unique in players of all ages, genders, and athletic ability can participate together. It takes just a few tries to learn and understand the sport. Mastering the techniques and strategies, well, that could take a lifetime.

The Mayfield Curling Club has for decades served as a training ground for both newcomers and masters.

Ryan MacRaild, the boys’ soccer coach at Independence, is eager to grow the sport and already has developed an idea to create a Greater Cleveland Scholastic Curling League for area high school teams.

“The Juniors Program is a great place for kids to come and learn the sport of curling, sharpen their abilities, and one day dream of becoming an Olympian,” he said. “It would be a great chance to get schools to compete, develop players, and eventually create chances for athletes to travel the world playing a sport that few in the US are involved in.”

Click here to learn more about curling and the Mayfield Curling Club.