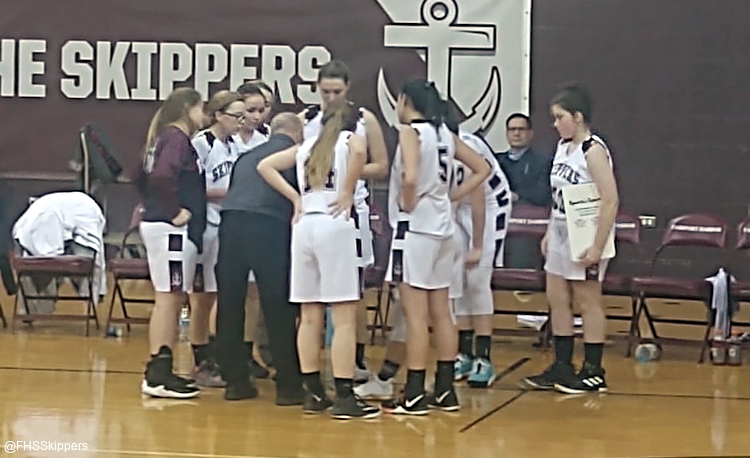 Fairport freshman Kara McFadden scored a career-high 30 points in leading the Skippers to a 55-33 win over visiting Richmond Heights on Thursday.

McFadden finished the game 6-for-7 from behind the 3-point arc.

“She was nailing anything she threw up,” Fairport coach Ed Reed said. “They were sitting back in a zone so we were moving the ball quickly around the perimeter but she created her own shot at times, too. She definitely did a nice job.”

The freshman fell just short of the school record for 3-pointers in a single game set by Jill Matsko, who drained eight 3s in a 2008 contest.

McFadden scored 12 of her 30 in the first quarter as the Skippers built a 16-9 lead. She added 10 more points in the second quarter as Fairport extended its lead to 32-17 at halftime.

McFadden’s two 3-pointers in the third quarter helped the Skippers hold off the Spartans.

Sophomore Olivia Eldridge also scored in double figures as she finished with 12 points and she helped Fairport compete in the paint.

“Olivia played really well,” Reed said. “She was out there for 32 minutes on the floor just like Kara. She was strong on the boards and getting put backs underneath and she played strong against their tall girl.”

Sophomore Nora Urban contributed to the win with six points and freshman Sam Yowell and sophomore Rachel Shaw added two and one, respectively.

Yowell also was a pest on defense.

“She’s only a freshman but she’s a strong defensive player,” Reed said. “She’s fast and she does not stop. She’s very good and only getting better this year.”