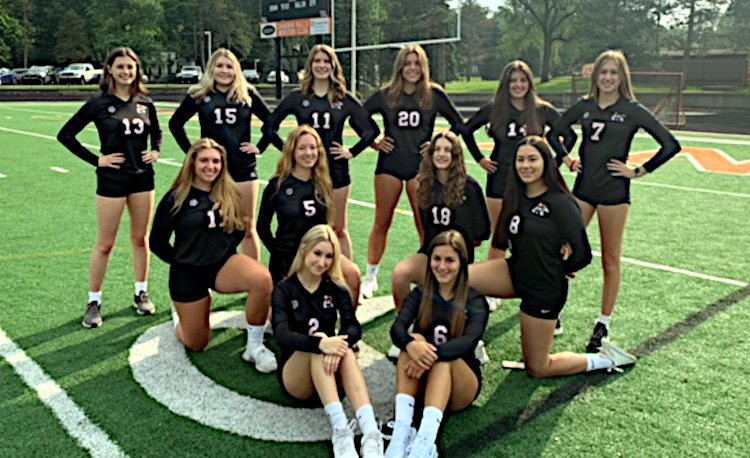 Chagrin Falls lost three six-foot athletes but what the Tigers lost in height they’ll make up for with might.

“What we lost in height, we gained in might for this year,” said second-year head coach Kelly Holtz. “The team is really scrappy. We had a great summer together at camp which helped the program gain valuable knowledge and contacts.”

The Tigers, who finished 8-9 overall and 5-4 in league play, do return three starters and already have developed a strong bond heading into the new season.

“We will be strong in passing and defense,” Holtz said. “The chemistry of this team is super strong, and our talent is deep.”

Chagrin Falls has five seniors ready to make an impact this season.

“She is a strong outside attacker and will get more opportunity to bang on a ball this year,” Holtz said. “She has really embraced that ‘learning is messy’ concept and has exploded in ability in out of season.”

“She’s our rock,” Holtz said. “She takes our team from defense to offense time and time again.”

Seniors Mia Charlton and Madeleine Pulte will patrol the middle and Megan Pandy will line up on the right side. Charlton and Pulte are first-time varsity players while Pandy returns from last season.

“Mia will get to make her debut on varsity now that last year’s seniors have moved on. She is relentless at middle and is constantly finding ways to swing at the ball. She has great connections with both of our setters and we are looking for a lot out of her this year,” Holtz said. “(Pulte) has all the right stuff going for her in spades. It’ll be her first time on varsity this year, but you’ll have to wait to see her until her knee heals from a severe sprain. We are looking for (Pandy) to battle it out on the right side with Michaela (Plante) to stop our opponents’ strong side attack.”

Plante, a junior, developed on the JV squad and is ready for her varsity debut.

“She is bringing her amazing left arm to our opposite,” Holtz said. “She can do a little bit of everything and has a quiet fire that can really light up our team. Looking forward to what she will bring to the right side.”

“Grace was the player who would do anything to be on varsity last year, so she learned a little bit of setting, outside hitter, and middle to contribute. This year, her range has helped her confidence in being center stage at the net at middle,” Holtz said. “Clara was our only freshman on JV, so she is very comfortable playing as one of two sophomores on varsity. She is a six-rotation player who has a real passion for the sport and wants to make a difference in every aspect of her game for the team. Jumping right from the freshman team to varsity, Isabel has worked really hard in the offseason and is ready to contribute on the outside. She is seeing the court now due to some injuries, but will be competing with our three talented outsides for playing time all this season.”

Juniors Kendall Guddy and Madeline Rodriguez both are setters and will play key roles in running the Chagrin offense.

Guddy recorded 367 assists and also served opponents out-of-system on 59-percent of her chances. Rodriguez is making her varsity debut.

“(Guddy) rose to the challenge as the varsity setter last year and has only gotten stronger to run the show this year,” Holtz said. “Madeline is making her debut on varsity this year. She is able to run a 5-1 or 6-2 easily and we will have to see what our team needs are to see where she will fit in throughout the season.”

Freshman Alexa Loconto already has made an impression playing libero and defensive specialist.

“A great surprise to our Chagrin program is this spit-fire freshman,” Holtz said. “She has the digging spirit and the off-ball movement that will help her contribute time and time again this season.”

Click here to watch the Tigers during their CVC Media Day interview.