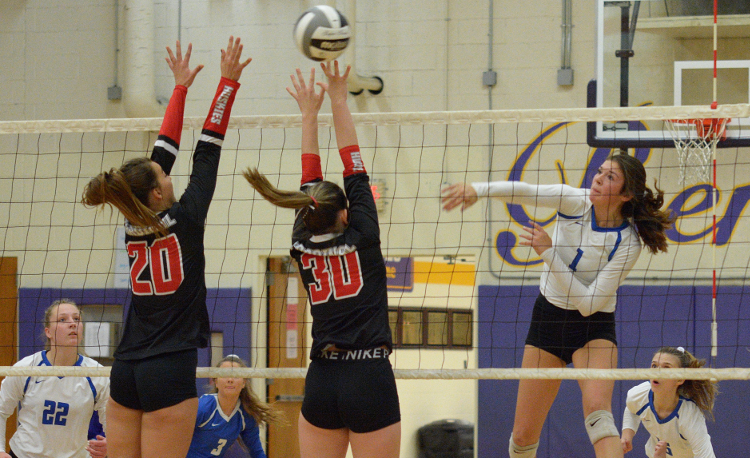 BURTON—Cardinal’s win over Grand Valley in the final game of the regular season deprived the Mustangs of sole possession of the Chagrin Valley Conference Valley Division.

“They’re a good team and it was sad to see them kind of shut down at the end but it felt really good to kind of end it that way,” Grand Valley coach Anna Applebee said. “It’s so exciting and it’s exciting to see our girls really bring everything together and make mistakes, but they made very few mistakes, and they played the game I knew they could play. It was very exciting.”

Cardinal opened the match with a 27-25 win in the first set.

The Huskies twice had leads of four points but a Grand Valley timeout halted Cardinal’s momentum and the game went back and forth until the Huskies scored the final two points of the game.

“Serve receive was definitely an issue,” Applebee said of that first set loss. “We didn’t have a block up there at the beginning and they got a five-point lead and we had to come back from that. There a few mistakes we cleaned up in the second, third and fourth sets.”

That dynamic duo combined for 32 kills in the match.

“They know how to put a ball down,” Applebee said. “Rylie sets very, very well and it brings a lot of momentum and volleyball is a game of momentum. Once you get a couple of kills and a couple of points, it just starts going from there.”

Alexis Cooper posted a team-high 21 assists and Hallie Soltis finished with 11 digs and two kills. Carly Bogdan added 16 digs for the Mustangs, who improved to 17-5 on the year.

“We have to take the momentum of this win but also the ability to fix our mistakes in the middle of a match and push through and everyone has to do the job they’re meant to do on the court,” Applebee said of facing the 20-2 Red Devils, who advanced to the regional semifinals last year in Division II. “We have to bring that with us.”

Cardinal closed out its season at 16-6.

“Districts are always a stressful, emotional time for teams,” Cardinal coach Karisca Chambers said. “Someone’s season is going to end each game. I was hoping we would be playing volleyball for a few more weeks, but it just didn’t go our way. Grand Valley played consistent and aggressive and we were having trouble slowing down their hard hitters. I am proud of my girls though. No one gave up. We had good body language and energy and played until the last point.”

The Huskies got off to a bit of a slow start this season but finished the season winning 10 of their last 12 games.

That’s good news for a team that loses just two starters to graduation.

“This was the youngest team I’ve coached since I started at Cardinal,” Chambers said. “Usually, the majority of the girls are upperclassmen. But this year, the underclassmen outnumbered the upperclassmen. That’s exciting to know we have talent like this coming back. We created two huge upsets this year, finished second in our conference and put up a fight the whole season. We need to be proud of the great things we did. I’m sad it’s over, but it was one heck of a ride.”