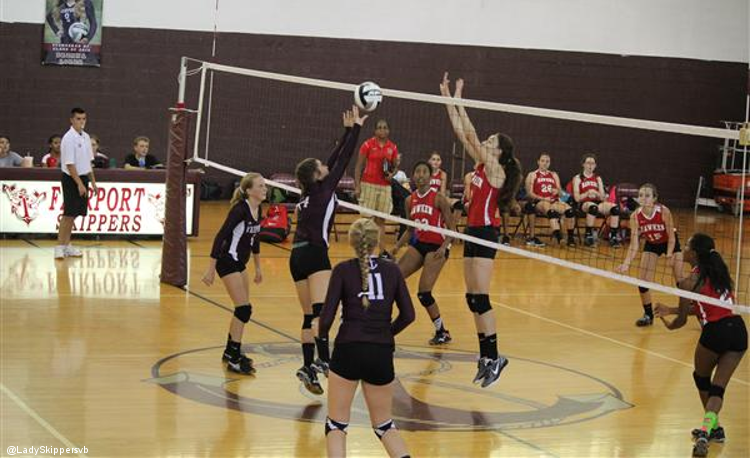 Despite returning four starters from last season, the Fairport Skippers are in a bit of a rebuilding mode under first-year head coach Katelyn Selleny, a recent graduate of Ursuline College where she earned four letters in volleyball.

Selleny faces many challenges at Fairport but she is excited about the potential the Skippers have this season and beyond.

“Heading into the 2019 season I believe that we can achieve anything we are willing to work hard for,” Selleny said. “Being a first-year coach, it feels like this program is essentially starting over, building from the ground up. Not only are the girls learning, but so am I. With four returning varsity players that all have great leadership skills and varsity playing experience, I feel that the younger girls have great people to look up to and learn from.”

The Skippers are projected to have four seniors, one junior and one sophomore in the starting lineup.

That experience should help the squad to play with the consistency Selleny hopes to see.

“In order for us to be successful this season consistency will be key,” she said. “Having a consistent level of talk, effort, and intensity, consistently, will allow for our team to grow and get to the next level.”

Outside the starting lineup, the Skippers are relatively young.

Only the four seniors have varsity level experience. Selleny realizes there will be some growing pains as the new varsity players learn their roles and develop their skills.

“A challenge I think our team will face this season is being a young team,” she said. “We only have four returning varsity players, all that are seniors. We have two freshmen playing key roles in our lineup. Through leadership from our seniors, on and off the court, I feel that the younger members are able to look up them as good role models. I feel that the returning players do a great job at making everyone feel comfortable and are willing to help anyone that asks.”

“Caitlin is another senior who shows great leadership on and off the court. Caitlin will play a crucial role in the starting lineup this year. With her precious varsity experience, her excellent ball control and the leadership she shows will carry her and the team far this year. Caitlin is a hard worker. I am excited to see what she can accomplish this year,” Selleny said. “Sarah is a leader through her hard work. She continuously strives to improve and is resilient in the face of adversity. Her intensity fuels the fire for the team. By having previous varsity experience, I feel that Sarah will continue to set the tone of what we want Fairport volleyball to be known for.”

“Morgan is a sponge. She soaks up and utilizes everything a coach tells her. She continuously strives to get better and to be better than she was the day before. As a sophomore, Morgan will be looked at to play a key role in our lineup. I am excited to see the improvement that Morgan will make this year,” Selleny said. “Faith’s constant hard work and wanting to get better will take her far this season. She is a quiet leader that leads through example. She plays with high intensity and she has the want to get better. Every day I have seen Faith improve. I am excited to see what she will do this season.”

Freshman setter Sam Yowell also is expected to make an immediate impact for the Skippers.

“Sam this season will be playing a crucial role in our lineup as the other setter,” Selleny said. “Throughout the summer and preseason, Sam has been working hard to understand her roles as the setter. As a freshman, I feel that Sam has the ability to make a big impact on the team. I am excited to see all of her hard work pay off.”

If all goes according to plan, and the Skippers play with the necessary consistency and effort, improving upon their nine wins from a season ago is a realistic opportunity.

That starts with implementing a “Next Ball” mentality.

“I feel that if we are continuously looking and focusing on the next ball, or next play, that it will keep the team’s attitudes high and they will be one unit instead of six individuals on the court,” Selleny said.