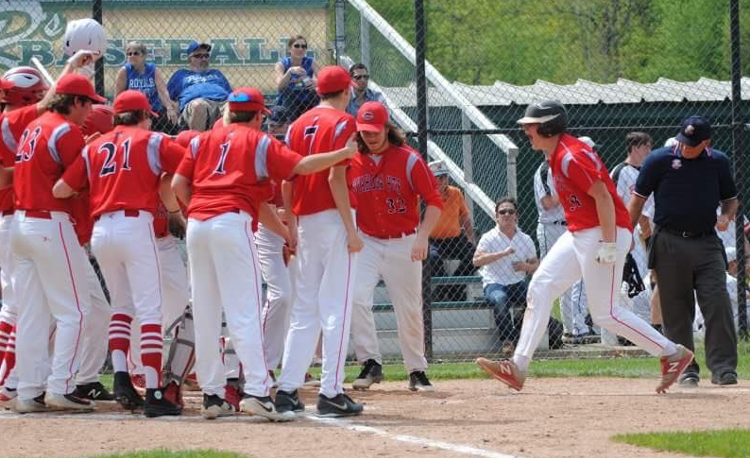 Cuyahoga Heights became a small-school powerhouse under head coach Marc Lowther, who won 301 games at the school on his way to the Northeast Ohio Baseball Coaches’ Association Hall of Fame.

“I’m taking over a traditionally winning culture created by coach Marc Lowther,” Solomon said. “I don’t think it’s necessary for me to change much of how things were done here before. It’s my job to fine-tune and add even more value to this already great baseball program. We have made it to regionals five out of the last six years and are defending district champions. That standard and expectation has been set and I don’t see a reason why we can’t do it again this year.”

The Redskins are just as eager as their new head coach to begin the next chapter in the program’s history.

“I’ve felt a hunger from all 26 players in our program,” Solomon said. “A brand new coach mixed with many positions and roles open due to graduating seniors from last year is a recipe for a competitive practice environment. This current junior and senior class has been overshadowed by two great classes before them in 2017 and 2018, but as they proved on the football field and on the basketball court, they can compete with the best. We expect the same on the baseball field.”

The defending Medina District champions return just three starters but several upperclassmen should be ready to step in and carry the torch.

He’ll pitch and catch and can fill several other roles.

“(He) has a presence about him that is contagious,” Solomon said of Allison. “He’s not much of a talker but his actions and how he goes about what he does earns the respect of his teammates. When he does speak, everyone listens. The Redskins roll as Richie rolls.”

Senior Brayden DiSanza joined Allison on the all-league first team. He plays left field and pitches and will fill the leadoff role when the Redskins are at bat.

“After a solid baseball season last year and on the gridiron this past fall, nothing he would want more than to be a key piece of this team’s success in his final chance to impact athletics before graduation,” Solomon said of DiSanza. “He will be the offensive tone-setter as the leadoff hitter. If Brayden is on base a lot, then you’ll see us score a lot of runs.”

Other seniors projected in the starting lineup include Alex Studniarz, Tyler Schlick and Tristan DeFranco.

Studniarz plays right field and will bat near the top of the lineup. He has a solid glove and is among the team’s leaders. Schlick plays third base and brings some heat when he’s on the hill. DeFranco also will work his way into the pitching rotation.

Seniors competing for time at first base include Jake Lasky, Justin Lambert and Jordan Krucek, who is battling back from a wrestling injury.

Junior Kyle Polack with start in center field and pitch.

“His impact will be felt in all aspects of the game–defense, offense, and on the mound,” Solomon said. “He takes his defense to heart, doesn’t get cheated at home plate, and possess the ability to play any role on the mound.”

“(They) will all bounce around various spots in the infield depending on who’s pitching in different lineups,” Solomon said. “Washko and Rose pitch and can play catcher, middle infield and third. Calvey can play second and third. All possess the ability to hit and I want to see them take the next step and transfer it to the varsity level.”

Despite the lack of returning starters, Cuyahoga Heights has the talent to again make a push in the postseason.

“We do have some talented players and players willing to do the dirty work and get after it,” Solomon said. “We have a couple returning seniors that have varsity experience doing a great job of leading and putting their arms around the first year varsity players. While we have talent and a great work ethic, the varsity experience could play a factor early on. It’s important for our guys to remember that regardless of level, this game is still played with 90-foot base paths and a 60-and-a-half foot mound. Our strong team bond needs to stay stronger than the adversity we will face early on from our inexperience.”

Gaining experience is only part of the recipe for success. The Redskins also have to remain consistent throughout the season.