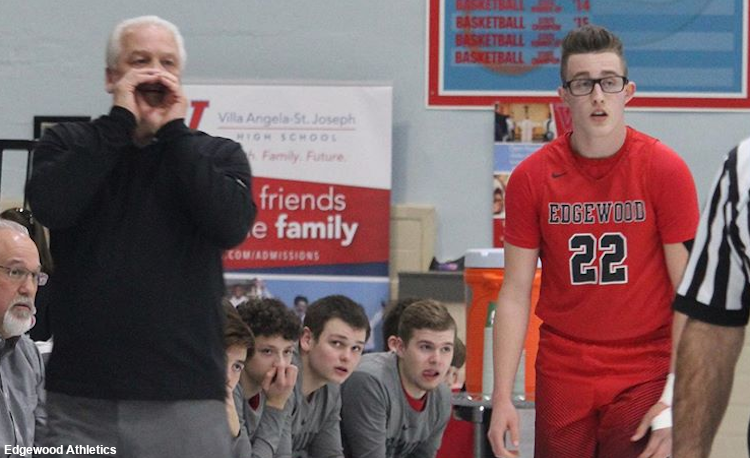 The Warriors didn’t hang their heads or even complain about a lack of respect. Instead, they responded with a 95-94 double-overtime win over No. 4 Villa Angela-St. Joseph at Viking Village on Tuesday.

“It was a fun night and a fun atmosphere,” said Edgewood coach John Bowler, who collected the 200th win of his career with upset. “We brought a real nice crowd tonight too, so the fan support was really, really good. The kids had a good time and we played well tonight.”

After starting the regular season with a 4-1 record, the Warriors fell on hard times and lost 14 of their next 15 games.

They closed out the regular season with a win over Conneaut on Saturday and opened the postseason with a bang.

“Right now, we’re healthy,” Bowler said. “Everybody is healthy and we played really hard. We also eliminated our turnovers. I think we ended up with eight or nine turnovers and that made a big difference because we’ve been turnover plagued throughout the season.”

Edgewood went toe-to-toe with VASJ in the first half and the Warriors even led at the break, 41-36.

The extended their advantage to double-digits and took a 59-49 lead into the fourth quarter.

That’s when the Vikings, led by Jaden Hameed, who finished with a game-high 42 points, made their move.

“Our man to man defense was locking them down,” Bowler said. “No. 1, he’s a phenomenal player, we locked down everybody else and the kids played real hard.”

The Vikings tied the game to force a first overtime and then a second, but the Warriors never gave up hope.

“That showed a lot of heart and a lot of determination,” Bowler said. “That has happened to us during the season. We lost a lot of games in the last four minutes of the game. We’re starting a freshman and a couple of sophomores so they’re learning how to win and keep their composure. I’m really proud of them.”

Alex Katon led the Warriors with 34 points. He scored 10 in the first quarter and had 12 at halftime. He went 6-for-6 from the free throw line in the second overtime.