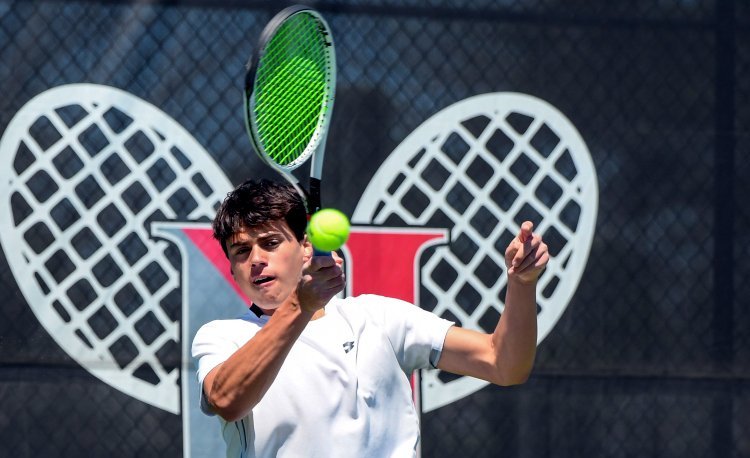 “Going into the state tournament, I felt really good about my game, especially seeing the way I played at sectionals and districts,” Pomeranets said. “Everything felt really good. My serve felt good and any forehand was feeling great. I was confident that I’d be able to go far in the tournament. I didn’t want to look too far ahead but I knew there would be a good chance I’d be playing Andrew again in the finals and I was hoping to get that rematch. I got it and it went my way.”

Pomeranets defeated Zimcosky in both the sectional and district tournaments, leaving him confident he could do it again at state.

But, first, Pomeranets had to get through his semifinal match.

Legacy Christian Tucker Culpepper opened the semifinals match with a 6-1 win over Pomeranets.

“I came out in that match not expecting him to play that well,” Pomeranets said. “He was just ripping everything and I couldn’t keep up.”

Pomeranets regrouped and went on to win the next two games 6-2, 6-3.

“I was really happy with the way I was able to handle adversity there and it’s always good going into big matches like the finals knowing that I’ve been put in a situation and I handled it well,” Pomeranets said. “I knew I was going to be able to bring it, but at the same time, no matter how well I played against Andrew in the rest of the season, he has shown that when it comes to big matches, like this state final, he brings his best game no matter what.”

He used that momentum to take an early lead against Pomeranets in the state championship match.

“We had a great match,” Pomeranets said. “I went down quickly again but I came back and I was playing pretty steady.”

“He made some unforced errors, uncharacteristically for him,” Pomeranets said. “I kind of took my foot off the gas a little bit and he started playing well and he had a lot of people there supporting him in the crowd and that was definitely getting in my head. I was pretty upset with myself because I saw the finish line and got complacent.”

With some help, Pomeranets regained the momentum.

The additional fans in his cheering section inspired him to refocus and finish off his win.

“They came to support and I really think that was a game-changer because it went from a couple of people in the crowd for me and Andrew having 10 or 12 guys yelling and screaming every point. That was pretty difficult to overcome but then when it leveled out with my team cheering me on and some other friends I had brought cheering me on, that allowed me to bring my A-game from there and I started playing more aggressively, and it worked out well.”

Zimcosky fought off a couple of match points but Pomeranets returned a Zimcosky serve and then watched as Zimcosky’s next shot landed beyond the end line.

“It took three match points and on the third one, he missed the forehand,” Pomeranets said. “When I saw the ball hit past the baseline, it was the most happy I’ve ever felt. I fell down on my back and I cried. It was such a relief. All the hard work I’ve put into it and all the stress I went through to get to that point, it was just really amazing.”

The win evened the series between Pomeranets and Zimcosky at five wins each.

Orange’s Chika Nwaozuzu finished third in singles play after he lost to Zimcosky in the semifinals and then dropped a 6-4, 6-2 decision to Culpepper in the third-place match.

The Lions will compete in the Ohio Tennis Coaches Association team state tournament on Sunday with the hopes of defending their state title.