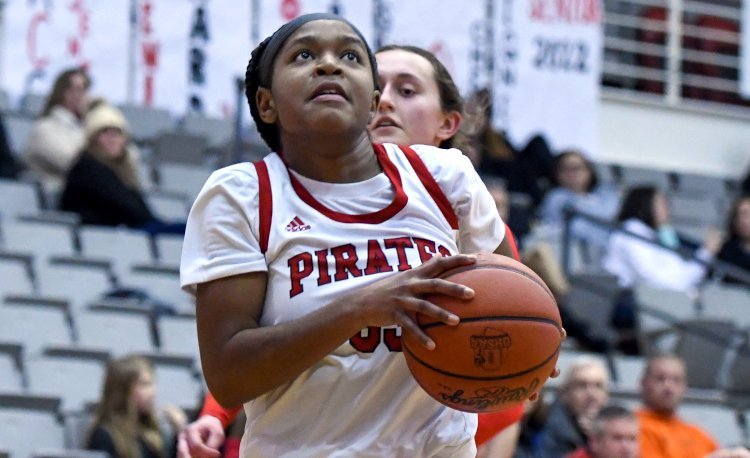 Perry claimed its biggest win of the season on Monday by knocking off visiting Stow in a non-conference game, 41-36.

The Bulldogs came into the game with a 19-1 record and a top-three seed in the Division I district tournament.

“They have a great program and they’re good year in and year out, so for us to get a win over them is huge,” said Perry coach Roy Infalvi, Jr. “I’m really proud of the way we played today, especially down the stretch.”

JaC’ana Anderson scored four of her team-high 16 in the first quarter as the Pirates built a 10-6 lead. She added six more points in the second and Marcela Rodriguez scored five points as Perry pushed its advantage to 24-18 at the break.

“This win over a good team really boosts our confidence going into the postseason because it gives us an idea that if we work hard in practice, coming into games like this with high intensity and a good flow will keep us winning games like this,” Anderson said.

Stow made its run in the third quarter but the Pirates played the Bulldogs even in the fourth to seal their win.

“We did a good job of responding to their run and not panicking against a good team,” Infalvi said.

Perry’s success started on the defensive end of the floor and that effort carried over to the offensive end.

“Defensively, we played tremendously well,” Infalvi said. “I thought we were physical and that was a big difference in winning those 50-50 balls and getting the loose balls and rebounds. We got after it on the floor and we took three charges in the first half. I think we set the tone defensively and we did get out a little bit in transition.”

Rodriguez also scored in double figures with 10 points, Grace McKoon contributed with six, Gigi Vicini pitched in with three, and Margeaux Jean, Izzy McKoon, and Rylee Hodge each scored two points for the Pirates, who improved to 17-3 on the year.

“Gigi played really well,” Infalvi said. “Defensively, she guarded one of their best players and JC played great tonight. Grace McKoon played really well, too. It was one of her better games. She didn’t score a lot of points, but she did a good job offensively and defensively, and she was in there at the end when it counted.”

The Pirates get another big test before the postseason when they travel to Division I Brush on Wednesday.

“We will prepare for a team that we know will be a good test for us going into the postseason, so just focusing on having a really good and intense practice to prepare for the game is what will make us successful on Wednesday,” Anderson said.