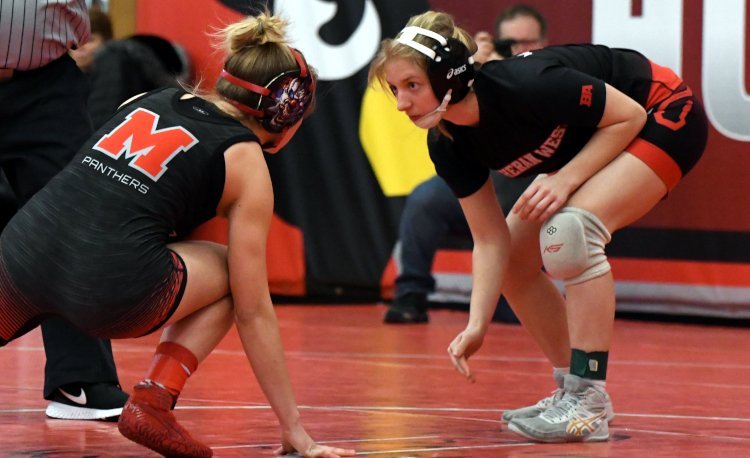 Lutheran West’s Catie Kerr set a new school record for pins in a season on Saturday at the Mentor Duals.

Kerr went 2-2 on the day with her 21st pin of the season topping the previous mark of 20 pins in a season set by Alayna Lopez.

“It’s unbelievable that I have my name in one of the school record books,” Kerr said. “When I first started wrestling, I knew nothing about the sport. I didn’t know what I was getting myself into or that I’d even ever be any good at it, so the fact that I started from nothing and have come to the point where my name is now in the school’s record books almost doesn’t seem real.”

Ranked sixth in the state at 120 pounds, Kerr has her sights set on earning a trip to the state tournament.

Regardless of what happens, Kerr is thrilled to be a part of the movement that helped get girls wrestling sanctioned in Ohio.

Adding her name to the school record books was simply a bonus.

“Knowing that I’ve already left a legacy for future girl wrestlers at the school is so exciting,” she said. “I’m excited to see how the sport grows and I really hope that as time passes more girls decide to give wrestling a try. It means the world to me that I have the opportunity to hold the record and hopefully inspire other girls to wrestle.”

Paris Willis went 1-0 at Mentor while Lo Zielinski was 1-2 on the day.

“It was a nice event,” said Lutheran West coach Dave Ressler of the Mentor Duals. “To be able to have the boys and girls wrestle at the same time was really cool. I liked what Mentor did to get everyone, for the most part, two or three matches.”

The duals were the last tune-up for the Longhorns before they host the Northeast District tournament on Sunday.

“This was a good tune-up,” Ressler said. “We’re going to see all of these girls in our district so it was nice to see last minute if we need to make some tweaks or anything like that. I’m excited for this final week for the girls to get to districts and hopefully, state after that.”