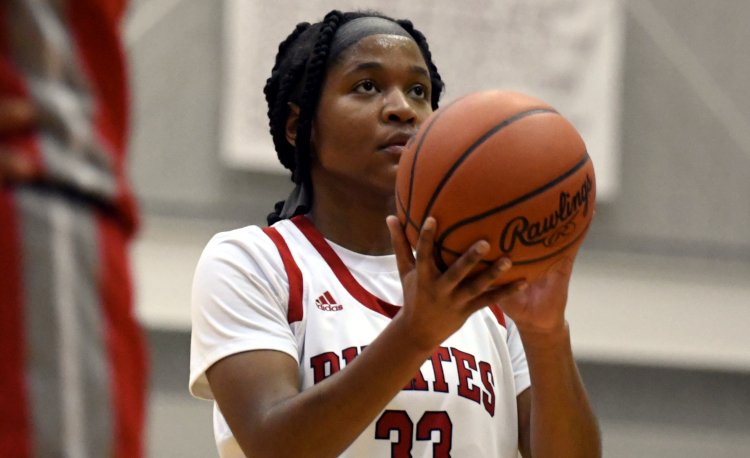 Perry snapped a rare two-game skid with a big win over visiting Gilmour Academy on Wednesday.

The Pirates, who entered the game with back-to-back losses, jumped out to a 26-14 halftime lead and then held off the Lancers in the fourth quarter.

“Tonight was a really good quality win for us against a really good Gilmour team,” said Perry coach Roy Infalvi, Jr. “We struggled a little bit the last two games, especially offensively, and our girls responded great tonight and earned a good win. After struggling a little this past weekend, we really took some time to self-scout and watch our own film as a team to figure some things out. Our team really put in the work and it paid off tonight.”

JaC’ana Anderson dominated in the first quarter as she scored 12 of her game-high 20 points in the opening eight minutes as Perry built a 15-6 lead.

Izzy McKoon, who finished with 10 points, took over in the second and scored six points with four coming via the free throw line.

“We did a solid job handling their aggressive press and were able to get good offensive looks as a result,” Infalvi said of the first-half success. “We really played well defensively and that resulted in some good transition looks, especially in the first half. We had a lot better flow offensively tonight. JaC’ana was huge for us tonight. She played all 32 minutes.”

Anderson took control of the paint and her teammates fed off of her success.

Perry outscored Gilmour in the third quarter, 9-7, and took a 35-21 lead into the fourth.

Good teams always make a run and the Lancers made theirs down the stretch.

“Gilmour is a really good team and they are battle-tested, they play a really tough schedule,” Infalvi said. “We knew they wouldn’t quit. They started to get some penetration to the basket so we changed up some defenses and made free throws down the stretch. Izzy took a charge, which was a huge defensive play, and we held them off down the stretch.”

Grace McKoon contributed to the win with nine points.

“This win was big for us after coming back from a two-loss streak,” Anderson said. “We came out tonight and did a lot of things better offensively and defensively that we didn’t do in the other games, so it’s a good feeling to get back on track.”