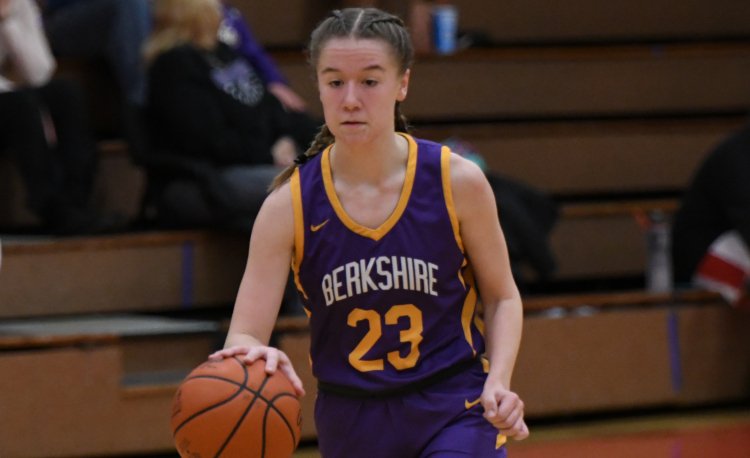 The Badgers allowed just nine points in the first half in the win.

“We are at the halfway point of the season and everyone is really starting to play well together,” said Berkshire coach James Bosley. “Our pressure forced turnovers and a lot of rushed shots that led to some transition points.”

Lydia Kastor drained one of her five 3-pointers in the first quarter and Lanie Wadsworth and Haley Stoddard also scored as the Badgers built a 7-3 lead.

Kastor hit two more 3s in the second and Kylie Neumore and Wadsworth both scored four points to push the Berkshire lead to 26-9 at the break.

“Lanie Wadsworth plays really good in transition getting down the floor. Her play inside along with Hayley Stoddard’s presence inside helped open up Lydia to get open looks,” Bosley said. “Right before halftime we forced a five-second call and then Natalie Hering hit a 3 to really send us into halftime with a lot of energy.”

Neumore paced the Badgers on defense in the second half.

“After halftime, Kylie Neumore picked up the pressure on defense creating steals and quite a few jump balls,” Bosley said. “She really understands her role in the game and does a good job of managing the offense to find open shots for other girls.”

Wickliffe made its runs in the second half as Laylah Ruscin and Haylee Timothy both hit 3-pointers in the third quarter and Ava Gabriel scored five of her team-high 15 in the fourth.

“Hats off to Coach (Bill) Harvey and the work he’s done at Wickliffe,” Bosley said. “Those girls played extremely hard for all four quarters, and it resulted in a really good fourth quarter for them to cut into the lead we have built. Ava Gabriel is only a freshman and she doesn’t play like it at all.”

Samara Young added five points for the Blue Devils and Ruscin and Timothy both finished with three.

Kastor led the Badgers with 15 points and also pulled down six rebounds to go along with six assists, three steals, and a pair of blocks. Wadsworth hit on all six of her field goal attempts to finish with 12 points, and Neumore and Stoddard both scored four. Neumore also recorded five assists and four steals and Stoddard pulled down six boards.

With the win, Berkshire improved to 6-7 overall.

“This was a really good game for us to get back in the win column after a tough matchup Monday against Chardon,” Bosley said.