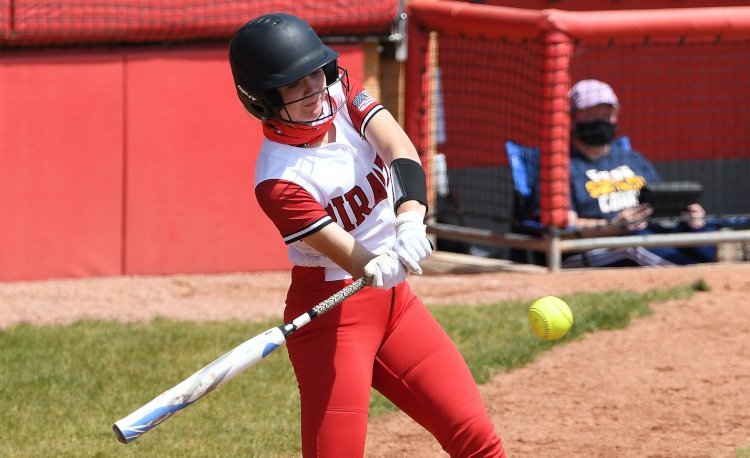 Perry’s softball team opened the 2022 season with a doubleheader split at The Ripken Experience in Pigeon Forge, Tenn., on Tuesday.

The Pirates opened the day with a 4-2 setback to Johnstown-Monroe and then bounced back with a 7-0 win over Fairbanks.

“It was a ton of fun coming out here and playing,” said Perry senior Gigi Vicini. “It helped get a lot of nerves out for the freshmen for sure. We are so grateful to play down here, it’s truly amazing.”

Perry jumped out to a 2-0 lead in the top of the third against Johnstown-Monroe when Faith Hartman drew a leadoff walk and Madeline Infalvi reached base safely on a sacrifice bunt. Rileigh Liddy, who ran for Hartman, and Infalvi both scored on a Calli Thompson fielder’s choice.

The lead was short-lived as Johnstown-Monroe scored four unearned runs in the bottom half of the inning.

Infalvi, Elise Strahan, and Hailey Hodge had hits for the Pirates in the loss. Hartman struck out seven in six innings of work.

Perry exploded for 12 hits in the second game.

“The energy in the dugout during the second game was very high during some points in the game,” Vicini said. “It was hard to keep it up for the whole game with it being our first back-to-back game of the season; everyone was drained.”

The Pirates broke the game open with a four-run third inning.

Sydney Collins and Infalvi hit back-to-back singles to open the inning and Thompson reached on an error that scored the first run of the game. Lilly Agostine and Rosalyn Tharp both singled and then hit a bases-clearing triple.

Perry added two more runs in the fourth and one in the sixth.

Agostine finished the second game 3-for-4 with a double and a run batted in and was 3-for-7 on the day.

Vicini struggled in the first game but went 3-for-3 with a triple and two RBI in the second.

“The first game was very bad for me at the plate,” she said. “I struck out twice and grounded out, but in the second game is when I hit well going 3-for-3 at the plate. It just took me a second to settle in since I haven’t seen true live pitching since (winter league at Cleveland State).”

Strahan finished the day with two hits and Thompson knocked in two runs.

Mia Ward picked up the complete-game victory in the circle.

“I was pretty pleased with my effort in the circle because I was hitting my spots and my pitches had good movement,” she said.

Ward allowed just three hits and struck out three in the shutout.

“I really focused on getting first-pitch strikes,” she said. “Both my screwball and drop curve had pretty good movement and were working well and I was consistently throwing them for strikes.”