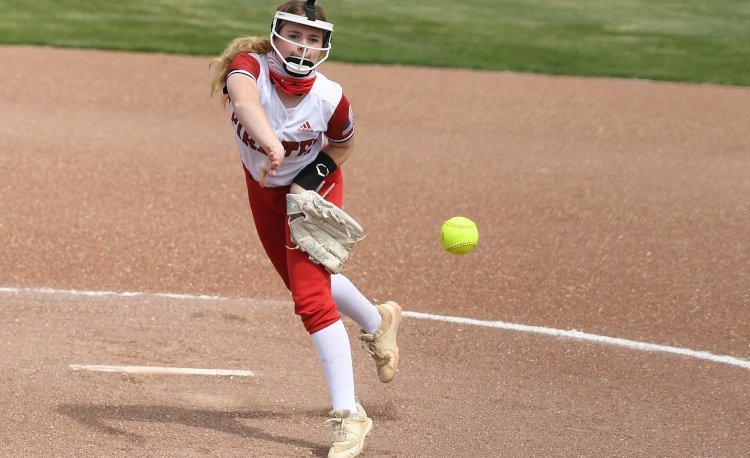 Mother Nature tried to intervene but the Perry Pirates extended their conference winning streak to 70 straight games by defeating host Geneva on Wednesday, 12-9.

A persistent rain picked up late in the game with the Eagles leading 9-7.

“The game should’ve been called in the bottom of the (fourth) after the home team hit,” said Perry assistant coach Joe Medlen, Jr. “The rain was starting to pour down hard, the skies were dark gray, and it was hard to see the ball, and every pitch, the pitcher was switching out the ball. The game should have been over, 69 wins in a row and it was going to end in a rain-out.”

Instead, the Pirates rallied back to keep their dominant winning streak alive.

“It was all happening so fast right before us,” Medlen said. “But, the angels watching over us cleared the skies rapidly and some sun started to even peek through. I knew all we needed was an opportunity to hit again. I’m truly so grateful for Geneva for being good sports and fighting through the conditions; they could’ve easily said the field was no longer playable and appreciate the umpires as well for understanding the situation and continuing to play ball.”

The Pirates scored three runs in the fifth and added two more in the seventh.

“It was so exciting to get to 70 and the way it happened was truly magical,” Medlen said. “For us to even get the opportunity to hit in that situation was surreal. I don’t even think the girls understand how impressive 70 in a row are, but when they look back on it one day, they will know they were a part of something truly special.”

Calli Thompson finished the game 3-for-4 with two doubles, two runs scored, and three runs batted in, to do her part to extend the streak.

“It’s huge not only for the team, but for the coaches, families, and community,” Thompson said. “It’s not every day you get to see a record like that in any sport, so being able to continue the legacy of players before us is something really special.”

Thompson’s success at the plate wasn’t an accident. She struggled last season to settle in and worked hard during the offseason to improve her swing and confidence.

“Coming off of a bit of a rough season at the plate last year, I really focused in the offseason on my confidence and approach in the box,” she said. “Coaches have stressed the two-strike approach and hitting backside all year, so working on it so often really helped me become more comfortable in games.”

Hailey Hodge contributed to the win with three hits, including a pair of doubles, and she knocked in four runs. Rosalyn Tharp and Gigi Vicini also doubled for the Pirates and Lilly Agostine had a hit and two RBI.

Mia Ward went the distance in the circle. She allowed six earned runs on 11 hits and struck out six.

“We got up early in the game and it got rid of some jitters, but Geneva brought the bats and was driving everything to the outfield which kept us on our toes the entire game,” Medlen said. “It was high intensity from start to finish and both teams knew every base mattered, every pitch mattered. We’ve worked so hard that we know what we are capable of and we were just so blessed to have the opportunity to battle back and I think we learned so much from today and are so grateful to play this game. It was the truest team win I’ve ever been a part of. I’m also very proud of both Mia and the opposing pitcher as I didn’t hear any excuses nor did I see any poor body language, nothing.”

Ward and Thompson teamed up to battle through the adversity the Pirates encountered throughout the game.

“Pitcher-catcher relationships are so important,” Thompson said. “I messaged Mia earlier in the day and we talked about confidence and just overall having fun while playing. Our ability to communicate face-to-face and through pitches really helped when we were in some tough spots, not to mention Mia’s hard work through all seven innings.”

Jordyn Alderman led Geneva with three hits, including a double, and two RBI. Daliz Alvarez was 2-for-2 with a home run and two RBI. Savannah Burton and Carmen Alvarez both recorded two hits and a double.