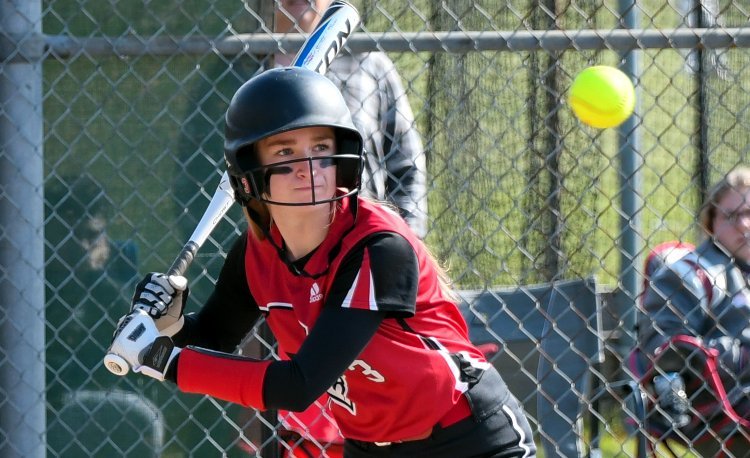 An off-season injury could have derailed all of Emma Pietrzak’s goals.

Instead, the Perry High School rising senior focused on her rehabilitation and did everything she could to return to the field and prove to college coaches she was back on the right track.

Her efforts paid off when Holy Cross offered a scholarship in June. Pietrzak quickly accepted the offer to play Division I college softball.

“It truly is a relief,” Pietrzak said of her commitment. “When I was doing my rounds telling friends and coaches about my commitment, (Perry assistant) coach Joey Medlen said to me, ‘You can finally take the field and just play like Emma Pietrzak,’ and I think that sums it up beautifully. The recruiting process is a mental challenge for any athlete, but in such an all-or-nothing sport like softball, it can become really taxing. I’m beyond excited to simply play the game now.”

The pain from surgery coupled with the mental anguish of possibly seeing her childhood dream slip away wasn’t easy to overcome.

Fortunately, she had plenty of support to get through those difficult times.

“Coach (Joe) Medlen did a great job keeping me involved and positive throughout the season,” Pietrzak said. “Though it was difficult to not be on the dirt, I enjoyed new roles like working with the younger girls, organizing affirmation bags, and even DJing for home games. I also had long talks with my travel coaches, who had and continue to have so much faith in my recovery. I am so fortunate to have people in my life who keep me grounded.”

Throughout her recovery, Pietrzak did her best to remain positive.

“Coach Stiles initially reached out to me in March of this year, just a few days after I posted my most recent ACT scores,” Pietrzak said. “At a school like Holy Cross, coaches notice athletes based on their academics first, because how can you recruit an athlete who may not be accepted into the school? We had a few chats over the phone before she invited me to visit campus in June. The visit truly sold it for my family and me. Being a 10-hour drive away, my mom had some reasonable concerns, but Holy Cross was not only beautiful but safe and welcoming too. Being a short drive from Boston is a great plus as well. Shortly thereafter, I committed.”

Pietrzak was drawn to Holy Cross first and foremost because of the school’s academic reputation.

“Holy Cross is known for its rigorous academic programs, and that was my primary target when looking at schools,” she said. “It also has an esteemed alumni network throughout the country, another rewarding factor that will set me up for success in my future beyond softball. I plan to go to law school after my time at Holy Cross, and there’s no better location than the East Coast for this field. The second I walked on campus, I knew it felt like home.”

Holy Cross recruited Pietrzak as a power-hitting third baseman and a backup catcher.

“Coach indicated that Holy Cross does not currently have a primary third baseman on their roster, so I will likely see a majority of my time there if all goes well,” she said. “Catching would be more so for spring break trips with lots of games. Her main focus for me, though, was my role offensively.”

While many coaches may have held off recruiting an injured player, Coach Stiles at Holy Cross wasn’t one of them.

“Telling any coach about an injury is nerve-wracking,” Pietrzak said. “On our first call, I had just recently been cleared to be out of a sling, nowhere near ready to play. I hesitantly told Coach Stiles, to which her reaction was nothing but reassuring and positive. She believed I was early enough in the process to make a full recovery by the time I step foot on campus my freshman year, and she trusted in my pre-surgery abilities. I continue to update her on my recovery and my more recent return to sport, and I believe she’s just as excited as I am.”

That trust and confidence Stiles had in Pietrzak’s ability to return from an injury played a big part in Pietrzak’s decision to attend Holy Cross.

“Coach has put so much trust into me, and I feel nothing but the same in return,” she said. “She is fairly new to the school, but already, her players speak highly of her and the direction she has for the program. A player who is entering her senior year at Holy Cross gave us a tour of the athletic facilities and was unbelievably kind to my family. Unfortunately, due to dead period rules, we were not able to meet personally with Coach Stiles, but our Zoom calls and conversations with players tell me that she is dedicated and compassionate. The recruits in my class are amazing as well, and though distance has not allowed us to meet, I know we will be great friends upon arrival next fall. All of these people have reassured me that I will feel at home at Holy Cross.”

With her commitment out of the way, Pietrzak is focused squarely on closing out her career at Perry with a strong senior season, which won’t be easy considering the turnover in the program.

“With Perry’s program in a bit of a transitional stage, from losing our seasoned pitchers to welcoming a new head coach, my main goal this year is leadership as we refocus as a team,” she said. “I will work to keep our environment light and ensure that high school softball remains fun rather than stressful as we work through these changes. “