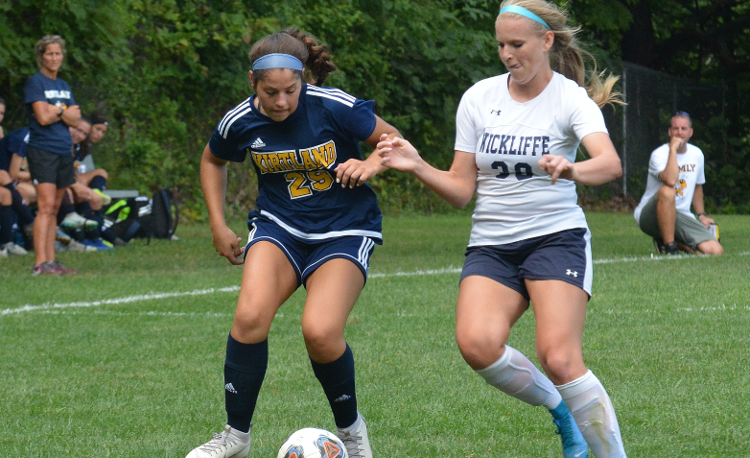 KIRTLAND—A high school soccer field measures approximately 5,000 square yards but it was just one inch that gave Kirtland’s girls’ soccer team fits in a 2-0 win over visiting Wickliffe on Monday.

The Hornets, who improved to 2-0, deflected five balls off of either the crossbar or post in the win.

“They were fun to watch but we just couldn’t finish,” Kirtland coach Ed Bradac said. “We put upwards of 30 shots on goal but it was one of those kinds of nights. No matter what we did, the goalkeeper to her credit, she was in the right spot at the right time, but the crossbar and the posts kind of stopped us a well.”

After Mia Rini gave the Hornets a 1-0 lead just 32 seconds into the game, the Hornets continued to attack the net but couldn’t add to their lead.

“We made that game harder for us,” Bradac said. “If we’re able to put two or three of those away in the first half, it’s a total different look. That just crushes the opposing team’s spirit but they defended well and they get credit for keeping us out.”

Rini was in the right place at the right time for that first goal.

Erika Zschuppe fielded a deflection and sent it out to Rini, who beat the keeper into the left corner of the net.

“She’s worked hard all off-season and she continues to strive to break into the starting lineup,” Bradac said of Rini. “Today we started her and we’re going to continue to change our lineup. By the eighth game, we should have a really good idea who our starters will be.”

Aria Evans-Roskos shook off her frustration of several missed scoring opportunities to increase Kirtland’s lead to 2-0 in the second half. Zschuppe also assisted on that goal.

“She puts a lot on her shoulders,” Bradac said of Evans-Roskos. “She does a lot of really good things and I think it’s just a little bit of frustration by several of them. We put a lot of balls over the net. We’ve got to get better.”

Kirtland’s defense was sharp in recording its second shutout in four days. The Hornets blanked Madison in their season opener on Friday, 4-0.

“This is our second game and second shutout,” Bradac said. “Tea is doing an excellent job along with Gabby and Amber and Corinne Greenlee on the outside, the freshman. They made one mistake but that’s part of the game. You play almost the whole game on their half of the field and then there’s that, ‘Oh, I’ve got to play defense.’ That’s the risk of a game like that. It’s 1-0 and then all of a sudden they get a shot and it can be 1-1.”

Wickliffe (0-1) had several opportunities to score in the second half.

One shot went wide left, another bounced off the crossbar and the third was booted right to Aquila in the center of the net.

“It was a bend but don’t break in the first half,” Wickliffe coach Steve Gribovicz said. “We were able to weather that storm. In the second half, we had a couple of opportunities there down the right side and made the most of them. We got one on the crossbar and one wide left and the other right to the keeper. It was a very good match. They were state runner-ups and it’s the first game of the season and we’re playing them and go 2-0 with them.”

“She’s a fine player,” Gribovicz said. “She had a 1.06 goals against average last year and she puts in the work and puts in the effort. She’s a lot more vocal this year. She’s stepping up and guiding that defense in the direction she wants them in. Her lateral movement, the way she reads the ball and her decision-making has been phenomenal. She added a throw into her game now so we’re not just punting it back to the middle. She’s making a lot of good decisions in the back.”

Kirtland travels to Independence on Aug. 27 while Wickliffe hosts Lutheran West on Thursday.