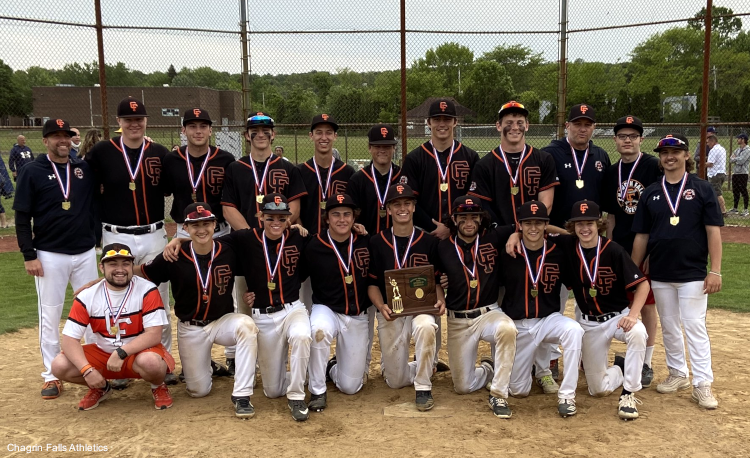 When Dawson Pierce was hit by a pitch in the last inning of Chagrin Falls’ 16-6 district semifinal win over Canal Fulton Northwest on Monday, Tigers head coach Michael Sweeney was left with a giant question mark in his pitching rotation for Thursday’s championship game against Tallmadge.

The situation took a turn for the worst when it was revealed that the pitch had actually broken a bone in the tip of Pierce’s ring finger on his throwing hand. Doctors removed his fingernail to relieve some of the pain in the finger.

Always a gamer, Pierce asked for the ball and gutted through the pain for five innings as Chagrin Falls outlasted Tallmadge on Thursday, 8-6.

“I was a little concerned whether he would even pitch today, let alone play,” Sweeney said. “He battled through it. It was an unbelievable performance to give us five innings with a broken bone on the tip of his finger.”

Pierce allowed four runs on four hits and he struck out two despite his inability to throw his full repertoire of pitches.

“He couldn’t really throw a changeup so he had to stick with his fastball and curve,” Sweeney said. “He was certainly in a lot of pain but it was incredible he went out there and did that for us. Before the game he told me, ‘Coach, I just want to do whatever I can to help the team.’ He felt like he could and he did and he was good at the plate too. He swung the bat well.”

Pierce’s teammates rallied behind him with a three-run first inning.

“It definitely helped the coach feel better, I can tell you that,” Sweeney said of putting up three early runs with Pierce on the mound. “Anytime you score first, especially when you’re the home team and you played one inning and won that inning, it just makes you feel a little more at ease and gives you momentum. Getting the lead early always is a good thing.”

Tallmadge pulled to within 3-2 in the second but the Tigers responded with two more runs in the bottom half of the inning when Will Tropp was hit by a pitch, Greenlief walked, and Pierce hit a sacrifice fly and McMullen added another RBI single.

Greenlief and Pierce hit singles in the fourth to push Chagrin Falls’ lead to 7-2.

McMullen, Hardy, and Kirkpatrick each finished with two hits and a combined five RBI in the middle of the Tiger order.

With the win, the Tigers advanced to the Massillon Regional. They’ll play Archbishop Hoban on Thursday at 5:00 p.m.

“That’s a good team with a lot of talent,” Sweeney said. “It will be another good battle for us.”