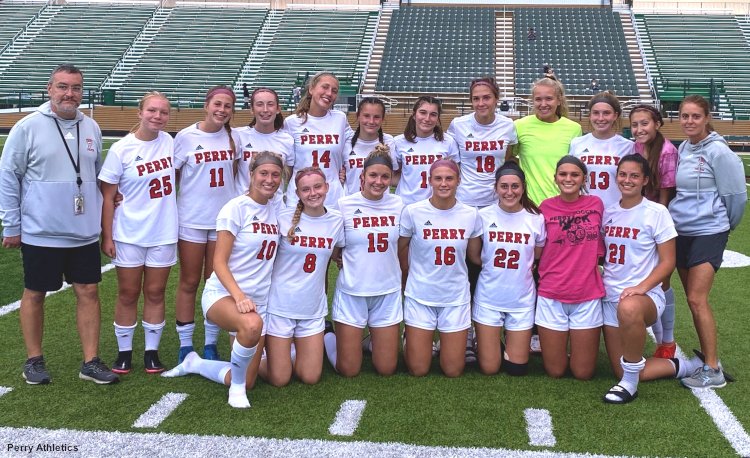 Experience matters and the Perry girls’ soccer team is reaping the benefits of playing with a young squad over the past three seasons.

The Pirates, who won five games in both 2018 and 2019 and seven last year, clinched the Chagrin Valley Conference Valley Division title with a perfect 6-0 record and a 13-1 mark overall.

“It’s been fun,” said Perry coach Rich Stavar. “We have seven seniors and most of them played a lot when they were freshmen, and I think if you go back and look at the record, they have steadily improved. They have worked really hard to put things together and win some games.”

Prior to this year, the Pirate seniors amassed a record of 17-23-9.

This year, the Pirates have won 13 games with two regular-season contests and at least one playoff game remaining.

“(Assistant coach) Michelle Carino and I are both pretty happy to see that,” Stavar said. “It’s always nice when kids work hard and it pays off for them.”

In addition to its quality senior class, the Pirates also have several underclassmen playing key roles.

While Agostine is new to the position, her athleticism and work ethic have allowed her to quickly adapt to her new role.

“She was a good field player, but our goalkeeper graduated and she essentially learned how to play goalkeeper. That was big,” Stavar said. “She hasn’t made a lot of saves but, especially early on, she made at least one big save or two big saves per game that if the ball had gone in it would have really changed the trajectory of the game. She has played a big part.”

Junior Sophie LeMond is a center-mid who has excelled at pushing the ball forward and on the defensive side when called upon and classmate Sophia Makad has solidified the outside.

“(LeMond) plays a holding center mid and does a really good job for us defensively,” Stavar said. “We have another junior, Sophia Makad, who has really stepped up. She has learned how to play as an outside midfielder, which really isn’t her spot but she does a nice job.”

Among Perry’s top scorers are two freshmen and three seniors.

Freshman Jordan Rowan leads the team with 22 goals and also has assisted on four scores. Seniors Mary Harvey (10 goals, 10 assists), Faye Makad (8g, 11a), and Marcella Rodriguez (5g, 3a), and freshman Ally Hopkins (4g, 1a) round out the top five.

Rowan has been especially effective.

We can rely on her to score. She’s definitely a scoring threat but we have a lot of kids who can actually score,” Stavar said. “She can do a lot of things for us. We’ve played her at a lot of different positions, so she doesn’t need to score for us to actually be effective on the field.”

While the Pirates have thrived with a large group of seniors, Stavar is confident his team won’t see much of a drop-off when that group graduates.

“For the first time in a long time, we actually have a JV team,” he said. “Those kids are pretty raw, they’re young and we have a number of kids who have very limited playing experience, and we have a number of kids who came out for soccer for the first time. We coached up the JV and the varsity and we watched them play. At times, their tactical awareness is beyond probably where it should be. Their tactical skills probably need to catch up to that, so hopefully, that will happen.”

The Pirates close out the regular season with a home game against defending Division III state champion Kirtland on Tuesday and a road game at Madison on Thursday.

After that, the Pirates will focus on their postseason opener against CVC rival Geneva.

“Right now, we’re worried about Kirtland and Madison,” Stavar said. “We’ll worry about the postseason when we get there.”