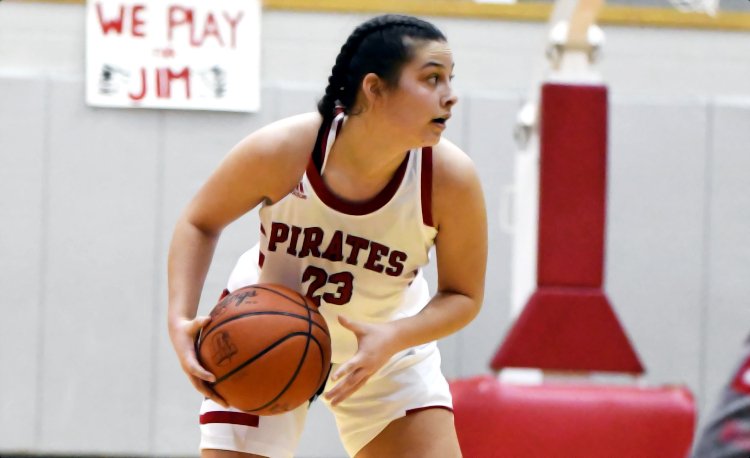 At first glance, it might appear that Perry’s girls’ basketball team will suffer from the graduation losses of Madyson Hacking and Elle Infalvi, but inside the program, the Pirates are as optimistic as ever.

Perry returns three starters and a fourth who saw spot duty in the starting lineup, as well as four others with varsity experience. The confidence in the gym is as high as ever and the Pirates look to defend their league and district titles.

“We are three-time defending district champions and have won our conference five years in a row. We advanced to the regional finals last season for the first time in school history. We want to defend those titles and our goal is to take our program to the next level,” said fourth-year head coach Roy Infalvi, Jr. “I feel really good about our team and what we can accomplish this year. We continue to challenge ourselves by playing a high-level independent schedule and I believe our team will step up to the challenge. We have hard-working young ladies that continue to develop and improve day in and day out.”

The Pirates finished the 2020-21 season with a 22-5 record overall and a 7-0 mark in the Chagrin Valley Conference Lake Division.

Perry can’t replace the production Hacking and Elle Infalvi provided over the last four but the Pirates will do their best to fill those holes with depth and a balanced roster.

“We should be very deep this year,” Coach Infalvi said. “We have some starters returning and some quality varsity contributors from a season ago. Even some players that did not get a lot of varsity time practiced each day with the varsity team. Just like every team, there are some unknowns until we get on the court. Who is going to step up in challenging times? Who will lead when things are not going well? I have some ideas on who those players are but until we are put in those situations we don’t know for sure.”

“Gigi is probably our most versatile player, especially on defense,” Infalvi said. “She has the skills and athleticism to guard anyone. She battled some injuries last year which caused her to miss significant time. This year she is primed to have a big year. I see her making big strides on the offensive end this season.”

Anderson, a forward, averaged 7.4 points and seven rebounds per game on the way to earning first-team All-CVC and honorable mention all-district honors.

“JaC’ana has put in the time this offseason and it is showing on the court,” Infalvi said. “She had a great year last season but I think this year she will make even bigger strides. She has become a big force inside the paint both offensively and defensively.”

“We are very impressed and excited to see Margaux take the next step,” Infalvi said. “Not only was she a solid point guard and defender for us last year, we now see that she has taken a more vocal leadership role and has become more of a scorer. She has been one of the hardest workers at practice so far.”

“Marcela has all the tools to be great and she is really starting to flourish in our program,” Infalvi said. “She has developed a strong work ethic and a competitive edge that will show this year. I am really excited to see how she responds to a bigger role this season. She is a complete player and I think it will show this year.”

Hodge and Steven both are guards.

“Rylee has made big improvements in her defense. I’m really proud of the way that she has worked on that part of her game. It is showing every day in practice and in our scrimmages. She already has a good offensive skill set and now her solid defense has helped her become a complete player,” Infalvi said. “Maddie is a hard worker and is very coachable. She played some varsity for us last year but suffered an injury that required surgery. She is healthy now and it is showing in her play on the court. I’m very excited to have her healthy going into this season.”

Izzy McKoon is a forward who averaged 3.5 points, three rebounds, and three steals last season. She earned honorable mention all-conference honors. Makad is a forward while Grace McKoon and Newsome are guards.

“Izzy has done great for us the past two seasons by stepping in and providing energy and creating a spark. I still think she will do that for us but now I think she’s starting to develop into a very good overall player. She has really worked on communication and her offensive skill set,” Infalvi said. “Sophia is developing into a very good player for us. She is very athletic and is starting to use her size and athleticism together as a weapon. She is a versatile defender and she can score on offense. If she can become more aggressive and confident she will be really good. Grace is one of the better shooters in our program. She works really hard and has the potential to have a big year. Grace played some varsity for us last year but practiced with the varsity all season. Those experiences will definitely help her this season. Kaitlyn put in a lot of time this offseason. She worked on her shot and her complete game as a whole. She is very coachable and is willing to do whatever it takes. She will help us this year on both offense and defense.”

Perry’s lineup will look a bit different than it has the past four seasons but the Pirates remain focused on the same goals.

“In order for us to be successful this year we need our players to take their game to the next level,” Infalvi said. “That means that we need to compete every day in practice and work to make each other better. We want our practices to be intense and tougher than games. It also means that we have to play as one cohesive unit and learn to trust each other.”