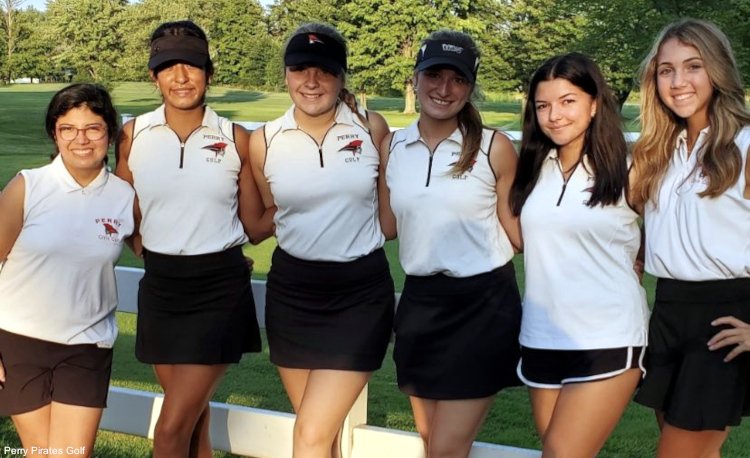 The Pirates graduated two seniors from that squad but they haven’t skipped a beat this fall despite a new coach and several new faces in the lineup.

Perry has won its first 14 matches this season under new coach Blanche Davidson, who coached the Pirate JV team before taking over for Dave Kahoun this season.

“I think we’ve built a really good sense of team and the girls get along really, really well this year,” Davidson said. “The other thing that we do is we’re very big on goal setting, so we set our goals per match. Every girl sets her goal for total score and putts. We have some internal team stuff too, like who has the low putts and things like that.”

Whatever the Pirates have done is working.

Not only are they undefeated, but already they have broken the school record three times this season. Perry’s new tournament record is 184 and this group of Pirates hopes to drop even more strokes from that total as the season progresses.

The Pirates closed out the regular season last fall with a second-place finish at the Chagrin Valley Conference Valley Division postseason tournament. Emily Capitosti, a current sophomore, finished second overall at that tournament while Emma Pietrzak, a junior, and Ashley Anderson, a senior, were sixth and 11th, respectively.

That core group has provided the Pirates with a solid foundation and the team’s newcomers have added depth.

Capitosti has shown tremendous improvement and consistency this season. She has averaged 45 strokes per nine holes and set a personal best of 42 this season.

Pietrzak and Anderson both have shot as low as 46 and freshman Addy Trefzger, who averages 48 strokes per nine holes, has shot a team-best 43 this season.

Seniors Olivia Siefrick and Emily Kusar have been solid throughout the year as they gain experience and confidence. Siefrick’s low round was a 49 while Kusar joined the team this season without ever swinging a club. Her average nine-hole round hovers in the low 60s but she has recorded a personal best score of 57.

“It’s a really big difference,” Davidson said of her team’s depth. “We had our No. 2 today not have a good day and our No. 5, Olivia Siefrick, stepped up. She had her personal record today, so they’ve been balancing each other out and it’s been really exciting. She’s very quiet and to see those other girls celebrate her having her personal best was joyous.”

The Pirates have had a lot to celebrate this season and that’s all by design.

“We celebrate the good stuff,” Davidson said. “We went out to dinner after the match (on Wednesday) with most of them–some had band responsibilities and stuff like that. We choose to celebrate when we have success and it’s working, so we’re going to continue with that.”

And with less pressure, each of Perry’s golfers has played with confidence, which has led to the team’s early success.

“Although we graduated three amazing golfers this past year, our two underclassmen, Addy Trefzger and Emily Capitosti, have truly stepped up and challenged our upper class,” Pietrzak said. “They came onto our team already skilled golfers and have continuously pushed us to get better. Beyond that, though, we are all great friends, which translates seamlessly onto the course. Because we’re such great friends, we can read each other holes apart and know when someone needs a pick-me-up. It relieves pressure, yes, but it is also reassuring to know that there are five other girls who will have full confidence in you, no matter the type of day you’re having.”

Adding Trefzger to the lineup certainly has sparked Perry this season. Trefzger finished second at the CVC preseason tournament to lead the Pirates to the team title. Four Perry golfers finished among the top 10.

Trefzger was active on the junior tour this summer, which has led to an increase in Perry’s overall out-of-season participation.

“The other thing they’ve picked up on, especially Addy, who participated in the Northeast Ohio Futures Tour, and that is such a good opportunity for these girls to really get good,” Davidson said. “Addy is a freshman and she is playing really, really well. Part of that is because she was competing throughout the summer. It was a good experience. They have been playing a lot of golf. We’ve been practicing and playing a lot.”

Davidson also has been encouraging her players to consider a future in golf, either at the collegiate level or recreationally.

She has brought in college golfers to speak to her players about the possibilities that exist after high school, but she also understands the future benefits available to a woman with a capable golf game.

“The other message is, at least from me, this sport, competing at the high school is important, but the most important part is these girls are going to go on in their careers and they’re going to have relationships in their corporate careers, or whatever careers they choose, that will put them heads above other people because they can play golf at a decent level,” Davidson said. “They go out and play on their own and they play from the white tees because I told them if they’re going to play at the college level, you have to play from the white tees. I have brought collegiate players in to talk to them about what to expect about college. I’m trying to set that tone too.”

Perry’s success certainly has been exciting. While much of that success has been driven by talent and depth, the Pirates also have developed a competitive fire as well.

“We challenge the boys a lot, let’s just say that,” Davidson said.