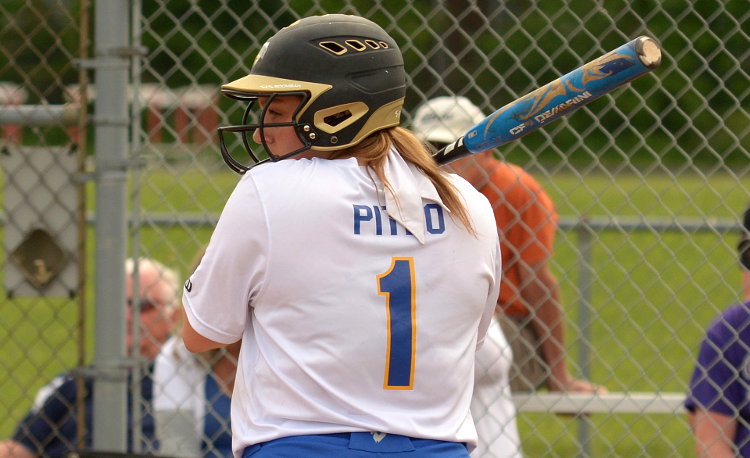 Sarah Piteo pitched the Independence Blue Devils to an 11-0 non-conference win over visiting Parma on Tuesday.

She also powered her way into the school record book by blasting her 12th career home run to become the school’s all-time leader in that category.

“It feels amazing to see that all the work I put in with (assistant coach) Mal (Kobak) in the offseason and at practice is paying off,” Piteo said. “I hope that I continue to have success at the plate to contribute to some team wins. I honestly wouldn’t be able to be so comfortable at the plate if it wasn’t for my supportive teammates and coaches, so that means the world to me as well.”

The Blue Devils got off to a slow start in their season opener.

After Piteo shut down the Redmen in order in the top of the first, the Blue Devils popped out twice to the second basemen and also grounded out to short.

Jordan Kohut was hit by a pitch and later scored on an error to give the Blue Devils a 1-0 lead after two innings.

“We looked horrible in our first two at-bats,” Independence coach Garry Moore said. “We decided at that point to get it together and we started putting the ball in play.”

Jenna Suhy and Olivia Pallini drew leadoff walks to start the Independence third and Piteo reached on a fielder’s choice. Kohut’s two-out triple cleared the bases and Cayla Mazzola and Hayley Biondi drew back-to-back walks to load the bases for Elise Nelson, who singled home a run to make it 4-0. Alyssa Pallini followed that up with another RBI single to increase the lead to 5-0.

Piteo hit a one-out homer in the fourth and Kohut, who finished 2-for-3 with three runs scored, added a single and Rachel Belitz doubled home a pair of runs.

Morgan Pascarella added a single and Piteo also doubled in the inning as the Blue Devils closed out the scoring.

Piteo finished the day 2-for-4 at the plate and pitched a five-inning shutout. She allowed just two hits and struck out two.

“My defense saved my butt a few times throughout the game,” Piteo said. “Although we lost some key players from last year, I firmly believe that we have filled those spots. Our defense was so solid today, which is a dream as a pitcher. I have so much confidence in who’s behind me that I can be stress-free on the mound, which is amazing.”

Independence improved to 1-0 on the year heading into Wednesday’s showdown with rival Cuyahoga Heights.

“It’s nice to get that first win out of the way,” Moore said. “You’ve been practicing indoors for the last five weeks and you finally see some live competition. You just don’t know what you have yet until you go against live pitching. Today we did it. I’m happy for the victory. We did what we had to do.”