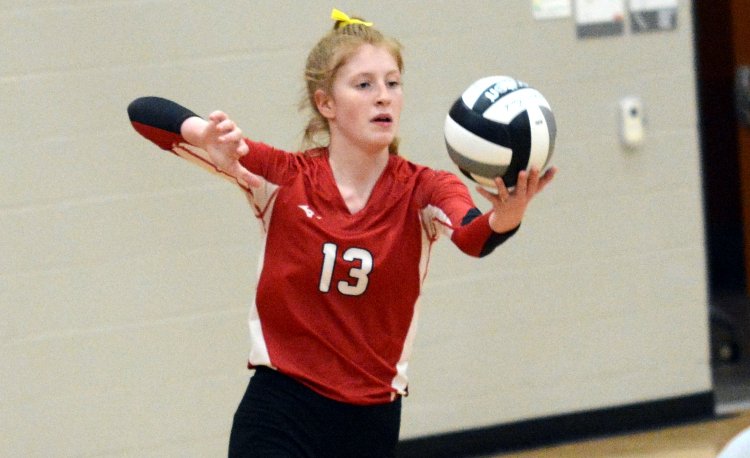 Perry returns six starters from last season including senior Sammie DiBease, one of the top hitters in Northeast Ohio.

The Pirates, who finished 14-8 overall and 8-2 in the Chagrin Valley Conference last fall, have a host of other hitters who should provide the team with a powerful attack this season.

“We have power hitter Sammie DiBease returning to the outside spot and have added freshman outside hitter Madison Miner,” said third-year Perry head coach Mike Fitzgerald. “Madison has power and is growing as a player daily. We have so many options at the right side that it will be difficult to decide starters on a daily basis. Returning at the right are Payge Silvis, Cara Vitale, who also is setting, Mary Bjorksten, also a defensive specialist, and Sarah Heffernan. We have been working on speeding up our tempo on offense with setters Maddy Tharp and Kayla D’Astolfo. Grace Desborough will return to the libero spot while being challenged for the top passer by Jaedyn Neimanis and Mary Bjorksten.”

The Pirates do have a hole to fill at middle blocker after the graduation of Maddy Lambdin. Senior Jaelyn Tomoletz is hoping to return from a knee injury, which will bolster the position, and Holly Nadinic, Carli McGonnell, and Savannah Schultz will split time in the middle.

“(They) have all been killing it all summer and we expect no issues in the center of the net,” Fitzgerald said.

Perry’s attack runs through DiBease, who recorded 309 kills, 225 digs, 26 blocks, and 51 service aces as a junior. She was named first-team All-CVC and second-team all-district.

Miner, the fab freshman, has a lot of power and should help the Pirates from becoming too one-dimensional in their attack.

Tharp will split time between setter and right side hitter. She finished the 2020 season with 197 digs, 120 assists, 21 aces, and 12 kills. For her efforts, she earned the team’s Defensive Player of the Year award as well as honorable mention All-CVC.

Rounding out the projected starting lineup are juniors McGonnell and Nadinic.

McGonnell recorded nine kills, a block, and one ace last season in a minor varsity role while Nadinic finished with 19 kills, 15 blocks, 11 digs, and four aces.

“(McGonnell) killed it at the JV level last season and is looking like she will continue that at the varsity level,” Fitzgerald said. “(Nadinic) has improved immensely over the summer.”

Bjorksten can do it all for the Pirates as she will line up at defensive specialist, right side, and outside hitter. She recorded 102 kills, 92 digs, 22 aces, and three blocks last season.

D’Astolfo is a setter. She recorded 258 assists, 32 aces, 78 digs, and four kills last season. Neimanis contributed with 22 digs, 39 service receptions, and three aces from her defensive specialist position, and Vitale, a right side/setter, finished the season with 251 assists, 31 aces, 121 digs, and 61 kills.

“(D’Astolfo) is a very consistent setter with a great serving percentage,” Fitzgerald said. “(Neimanis) will continue giving a great battle for the libero sport when she returns from an ankle injury.”

With their returning talent and experience, Perry is poised to make a run at the CVC title and shake up the postseason but the Pirates have to come together and play as one team. That starts with better communication and maximizing their strength at the net.

“We have a mixture of strong hitters and smart players in the front row,” Fitzgerald said. “We will try to move the ball around more than usual.”