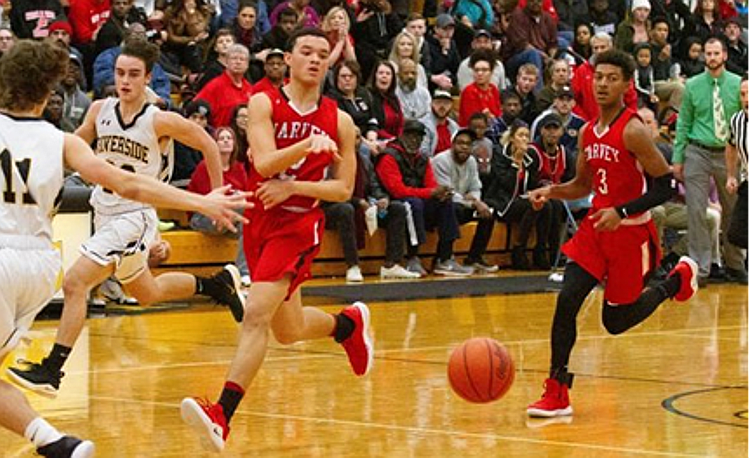 With several others ready to contribute, the Red Raiders should be in contention for the new CVC Lake Division title this winter.

“We feel pretty good about who we are at the moment,” said eighth-year Harvey coach Dave Wojciechowski. “Our guys have worked hard, we have seen some of our younger guys step up and we are looking forward to their growth throughout the season. With a few players returning, we are excited about the potential we have for the upcoming season.”

Harvey finished last season with a 16-7 record overall and an 11-3 mark in conference play.

Two first-team All-CVC performers return to lead the way for the Red Raiders, who will face some adversity along the way.

“Some of the challenges we will face will be a demanding schedule, a bunch of young guys who will be learning on the fly, and a lack of a real true big player to take up space on the interior,” Wojciechowski said. “We will fight through these issues on a daily basis and look for leadership from our returning guys to help the growth process.”

“We will go as these two go,” Wojciechowski said.

Thomas, a 6-foot-3 senior forward who has twice been named all-conference, averaged 14 points and five rebounds per game last winter.

“Bishop is a young man who has had a tremendous impact on our program,” Wojciechowski said. “He will hit the 1,000-point total before Christmas and might become Harvey’s all-time leading scorer. He is a kid who will be playing at the next level after graduation, so we expect big things from him in his senior season.”

Coffee, a 6-foot-3 sophomore guard, was named first-team all-league and third-team All-Ohio as a freshman after dropping 15 points with four rebounds and five assists in his high school debut. He enters the 2019-2020 season with three Division I college scholarship offers to his credit and interest from a host of other schools.

“Rod is an amazing young man who excels in the classroom and on the court,” Wojciechowski said. “His 4.5 GPA and his on the court talents will make him one of the most sought after guards in Northeast Ohio in the coming years. With a year under his belt at the varsity level, we look for Rod to provide leadership and steady play throughout the season. He is our go-to guy and he will be a major impact player for us this season and for years to come.”

Seniors Ethan Hach and Tyrelle Early and sophomore Hassan Jones II also are expected to start for the Red Raiders.

Hach, a 6-foot-4 forward who has played on the varsity team for three seasons, averaged five points and two rebounds per game last year.

“Ethan will have a major impact on our season as we expect him to perform at a high level,” Wojciechowski said. “We have seen his leadership skills take off in the last few months and we are looking for him to provide rebounding and toughness on the interior, while scoring from inside and out.”

Early, a 5-foot-10 guard, was a two-year starter before suffering an injury and missing the first 12 games last year. He ended up with four points and two steals per game last winter.

“Tyrelle has been playing varsity since his freshman season and has valuable experience we will look to,” Wojciechowski said. “He is a real competitor and a guy who likes to take the challenge of covering the opponent’s best players. Tyrelle has put on strength in the weight room and will provide valuable toughness and outside shooting to our team.”

“H2 was a surprise transfer for us and he has shown early on that he has a ton of potential,” Wojciechowski said. “He plays with a high motor and provides length on the perimeter. He has a very good shot and is learning how to attack the basket. We are excited for his future as he has a chance to be real good.”

The talent and depth are there for the Red Raiders to make a run this winter but they can’t afford to look too far ahead and must focus on the basics to achieve their goals.

“Our team goals are to get better on a daily basis,” Wojciechowski said. “We want to compete with great passion. We want to bring tremendous effort every time we step on the floor, watch video, lift weights, and we want to show effort in how we support one another. We are looking to build a team with a family mentality, doing this will help foster a togetherness that we hope will help when it comes game time.”