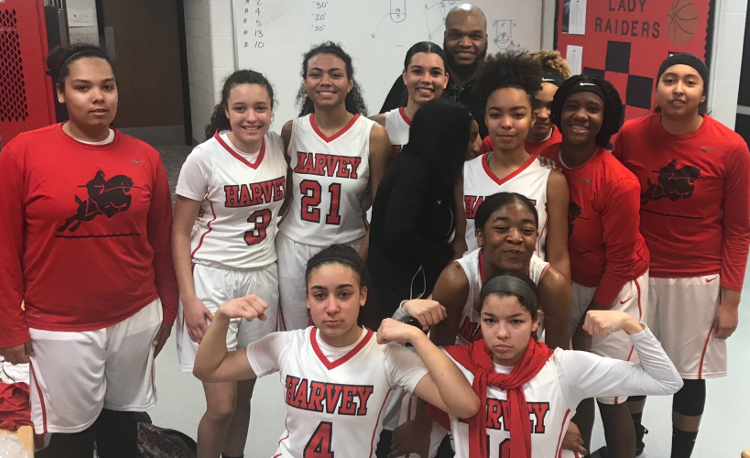 Factor in the speed and athleticism opposing teams will have to face and the Red Raiders become a matchup nightmare.

“I feel that my team will be a tough matchup for many this year due to our speed and athleticism,” second-year Harvey coach Jerimie Acree said. “Also, the ladies’ commitment to improving on the defensive end of the floor will pay huge dividends for our program.”

Harvey won just five games last year, including two in Chagrin Valley Conference play, but that should change this winter with more experience and depth.

Despite the number of returning starters and those with varsity experience, Harvey remains relatively young with just two seniors. That’s a hurdle Acree and his staff is working hard to clear.

“Our youth will definitely be a challenge for us this year,” he said. “We overcome that challenge as a staff with patience and simple game plans so that our ladies can always play fast. We look to dictate the pace of the game from start to finish and force teams to play outside of their comfort zone.”

Alston, a 5-foot-5 sophomore guard, is one of Harvey’s most athletic and talented players.

“Such a natural and talented athlete,” Acree said. “Tamia will be a special player for us the next three years. We expect her to play a major role for us this year.”

“Hailey is such a competitor. She’s the one that can put the ball in the basket often once she finds her rhythm,” Acree said. “(Grimes is the) best on the ball and off the ball defender I’ve ever coached. Cynthia takes on the challenge of guarding the opposing team’s best player every night and does a great job for us.”

Davis, a 5-foot-3 senior guard, and Gray, a 5-foot-9 junior forward, round out the starting rotation.

“’Big Body,’ as well call her, is one that plays bigger than what she is,” Acree said of Davis. “Asia finishes well at the rim and has worked to enhance her skillset this summer. Elly is an athletic ‘big’ that contributes on both ends of the floor. Whether it’s blocking shots or solid post moves in the paint, she always finds a way to help her team.”

Harvey will rely on two sophomores and two freshmen to provide depth.

“AD is one of our hybrid players in our program, meaning that she can contribute in the paint and on the perimeter,” Acree said of Davis. “She can cause matchups problems for teams with traditional bigs. Tashira has worked hard all offseason to improve her game. She can dominate the paint on any given night and I look forward to seeing her growth this year.”

Ashia Robinson, a 5-9 forward, and Lola Thomas, a 5-6 guard, will make their high school debuts this season.

“Ashia has a motor that never stops. Her length and athleticism will help our program on both ends of the floor,” Acree said. “Lola has a high basketball IQ for her age. She’s fierce and doesn’t shy away from adversity.”

While the Red Raiders seek to improve upon their record from last winter, they also have set the goals of beating crosstown rival Riverside and to win at least one postseason game.

To do that, Harvey must focus on the basics.

“We know that in order to be successful we need to turn the floor over, dictate the pace of the game, take care of the basketball and make free throws,” Acree said.