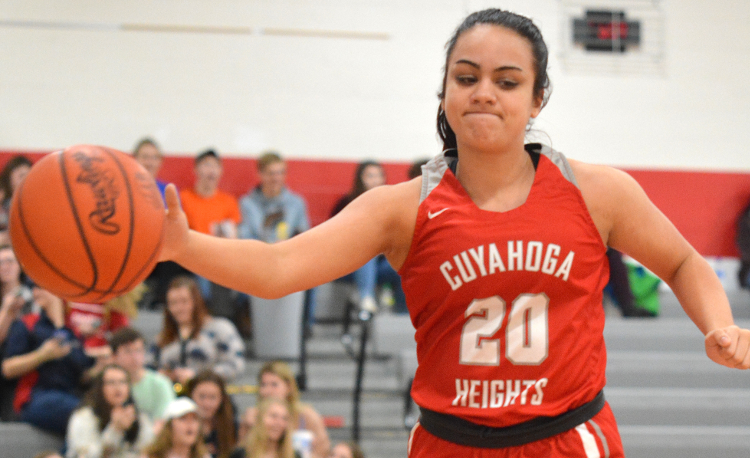 CUYAHOGA HEIGHTS–Cuyahoga Heights struggled to put the ball in the basket and fell to visiting Kidron Central Christian in a Division IV sectional championship game on Saturday, 31-20.

“We knew they were a real aggressive defensive team and they play really hard,” Cuyahoga Heights coach Al Martin said. “We saw them out at Open Door and were really impressed by how well-coached and how hard they play so we knew it was going to be a grind today.”

Sydney Dyer drained Cuyahoga Heights’ only basket in the third quarter and Mia Spicer hit another 3 in the fourth but the Redskins couldn’t keep up with the Comets, who drained four 3s in the second half.

“We’re not a particularly good offensive team,” Martin said. “They struggle a little bit offensively as well, and I think you saw that in the first half, it was a low scoring first half. In the second half, it was a matter of who was going to make shots and I thought No. 5 came out and knocked down a couple 3s in the second half and I think that was the difference. Once they got the lead, neither one of us were going to do a very good job of coming from behind and they played a solid game throughout.”

“We didn’t make enough shots, we were like 7-for-38 so it was a tough shooting night for us,” Martin said. “That’s not atypical for us. We struggled shooting the ball all year and we knew we had to make some shots. We just didn’t make enough.”

“I was really impressed that two seniors–Tori Santiago and Kelly Orlowski–stepped up and took on starting roles and some leadership roles,” Martin said. “I talked to them in the locker room about how it allowed Sydney Dyer, a sophomore, and Mia Spicer, a freshman, to come off the bench and be a little bit more comfortable and rotate with them. I thought that was a key and the leadership from Brooke Wilson and McKayla Spicer throughout the season.”

Wilson was a four-year player for the Redskins and a rare four-sport athlete at the schools.

“She’s a great kid, a great student,” Martin said. “She’s a four-sport athlete–she does gymnastics in the winter as well as basketball–so there’s a lot of stress for her on her body. She led us in scoring and rebounding. She’s an unbelievably classy girl. She works really hard and is a great role model for our younger players. What she did this year will carry over to next year so our younger kids see how you operate, particularly in a season like this where everything did go well for us. We didn’t get as many wins as we’d like to get and we finished third in the league, which I thought was a good accomplishment for this group but we’re used to competing for the league title. Her leadership, when things were good or bad, was great for us throughout the whole season.”