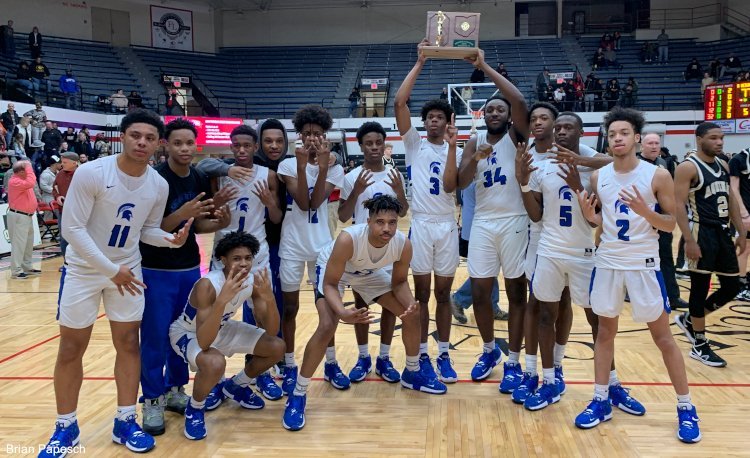 CANTON—Richmond Heights amped up the intensity in a 77-54 win over Louisville St. Thomas Aquinas in the Division IV Canton Regional championship game on Friday.

With the win, the Spartans improved to 23-4 overall and advanced to the state Final Four for the third time in the last four seasons.

“(The intensity) starts with practice,” said Richmond Heights coach Quentin Rogers. “We don’t take anything for granted. I don’t care if we are up 20 or two, we have to keep the same intensity no matter what, and we want to dominate quarters.”

The Spartans dominated from start to finish.

Richmond Heights built a double-digit lead in the first quarter and after a stingy and aggressive defense set up the Spartan offense to attack the basket, the lead was 33-19 at the break.

“We always emphasize defense,” said Jaiden Cox-Holloway, who led the Spartans with a game-high 17 points. “We use our athleticism to beat teams, so that’s what we did.”

On-the-ball pressure was a key to Richmond Heights’ success.

“Just cause pressure,” Rogers said. “We just want to make sure we have constant pressure and make guys work for every single thing they do.”

A 6-0 run and a DeErick Barber three-point play put the game away in the third quarter. The Spartans took a 58-34 lead into the fourth.

London Maiden contributed to the win with 12 points and Barber and Josiah Harris also scored in double figures with 11 and 10 points, respectively. Detrick Hearst and Rodney Williams added eight points each.

“It feels great,” Maiden said of the Spartans’ offensive scoring. “If I’m getting triple or double-teamed I just pass it out and they hit the shot.”

The win was the 18th straight for the Spartans, who will play Berlin Hiland in a Division IV state semifinal at the University of Dayton on Saturday. Tip-off is scheduled for 10:45 a.m.

Richmond Heights played in the state semifinal in 2019 and 2021. The Spartans reached the regional championship game in 2020 before the COVID pandemic shut down the season.